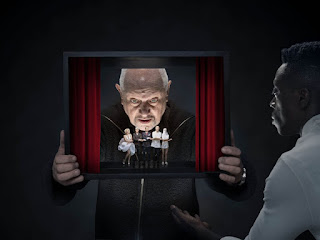 "500 years in the making, the purge of the human race is about to begin." Find out more about The Last Faust, an epic project by Philipp Humm about an epic tale by Goethe...


This new re-telling has transposed the 500-year old allegorical tale of Faust’s pact with the Devil to Silicon Valley in the year 2059. Humanity is on the brink of extinction as Artificial Intelligence (AI) heralds a new dawn of technological superiority.

Faust’s successor, Dr Goodfellow is the CEO of Winestone, the world’s largest and most secretive tech firm. His predecessor Dr Faust sold his soul, traded for the creation of the first Superhuman, to the devil Mephisto, in the manifestation of a Hedge Fund manager. However in the process, he unleashes a much darker force on to the world.

The Last Faust stars Steven Berkoff as damned tech CEO Dr. Goodfellow alongside Martin Hancock as Faust and Glyn Dilley as Mephisto. The directorial debut of the London-based German artist, Philipp Humm, the film is co-directed by Dominik Wieschermann and has condensed Goethe’s epic into a 108-minute feature film.

Philipp Humm is a former tech entrepreneur who dropped out of corporate life to focus full-time on his art. Speaking about the film’s contemporary spin, he said, "The story of Faust has more significance today than possibly any other time in history, our voracious thirst for technology means we’re sleepwalking into a dystopian future where artificial intelligence, unfettered by human concepts of empathy, reshapes the planet in its own image. The fact that we’re complicit in our own inevitable demise makes this tragedy all the more apposite. Before the Devil steals your soul, he’ll first steal your password.’’

The production, shot in multiple locations across London in 2018, was written by Phillip Humm and Ellen Waddell, based on Martin Greenberg’s translation. It is accompanied by an original score with additional music by Sirtaki, Wagner and Yello.

The Last Faust is a fragment of Humm’s Gesamtkunstwerk or ‘Total Work of Art,’ which includes:

The Last Faust feature film is scheduled for international release in November 2019.

Find out more about the film and the whole art project at https://philipphumm.art/the-last-faust/