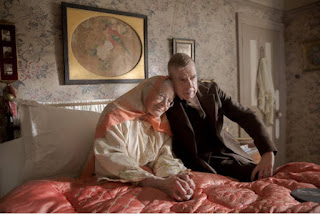 Mrs Lowry & Son depicts the relationship between L.S. Lowry, played by Timothy Spall, one of Britain’s most iconic artists, and his mother Elizabeth, played by Vanessa Redgrave, with whom he lived until her death.

The film follows Lowry in the beginnings of his career, as he yearns for his work to be appreciated in London. However, his disdainful mother, Elizabeth actively tries to dissuade her bachelor son from pursuing his artistic ambitions. Elizabeth never fails to voice her opinion at what a disappointment he is to her. This powerful, yet humorous story imagines the impact this obsessive mother and son relationship had on the great artist.

L.S. Lowry became internationally famous for his depictions of 20th century industrial life in the North West of England, and the legacy of his work remains a huge presence in the region, not least at The Lowry, a purpose-built art gallery in Salford Quays.

The film is directed by Adrian Noble, the former director of the Royal Shakespeare Company, and made by production company Genesius Pictures. Noble said: “The preparation and shoot of Mrs Lowry & Son was one of the highlights of my directing career. The opportunity to work with actors, cinematographer, designers of such calibre was a privilege and brought out the very best in all of us. It’s primarily a film about the relationship between a mother and her son. She suffocates him, slowly and systematically, but he finds release and life through his art and in the streets of Salford. Great actors, great performances. I’m particularly delighted that my film will be premiered at the Edinburgh International Film Festival. I have had theatre productions visit the city over the years. I’ve always been struck by the bracing intelligence of the audiences and the respect given to all matters artistic.”

Mark Adams, Artistic Director of Edinburgh International Film Festival added: “Mrs Lowry & Son is a delightful balance of drama and humour, beautifully performed by Vanessa Redgrave and Timothy Spall and directed by compassion and style by Adrian Noble. It is such a pleasure to close this year’s festival with this great British film.”

Following its World Premiere at the Festival Theatre on Sunday 30th June, Vertigo will be releasing the film this summer in UK and Ireland. Tickets are now on sale here https://www.edfilmfest.org.uk/2019/mrs-lowry-son

The 73rd edition of EIFF runs from 19 June – 30 June 2019. For more information on this year’s Festival visit www.edfilmfest.org.uk.