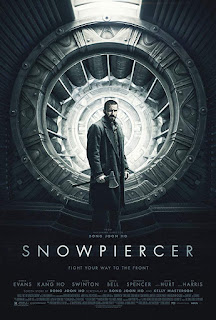 Steve Taylor-Bryant fought his way to the front and finally got to watch Snowpiercer...

Wilford - “Curtis, everyone has their Preordained position, and everyone is in their place except you”
Curtis – “That’s what people in the best place say to the people in the worst place”

I seem to have been waiting for this film for as long as The Man Who Killed Don Quixote, the fact that Snowpiercer contains an important character called Gilliam means that’s hardly surprising but, despite the best efforts of a pig of a producer to have the film changed, eventually Bong Joon-Ho’s directors cut was released, in some territories. And yet, we in the United Kingdom went on waiting. Finally, a stream has become available thanks to Netflix so here I am, some six years later, watching the film and I go in with the same trepidation as I did with Quixote; What if I have built it up in my mind too much? What if it is no good? Again, shouldn’t have worried as Snowpiercer is a very enjoyable, highly watchable piece of cinema.

It's 2031, seventeen years after authorities in seventy-nine countries decided collectively to combat global warming with the coolant CW-7. The result was the Earth being immediately sent into a deep freeze, killing all human life except a handful who now live on an "ark", Snowpiercer, a revolutionary train built before 2014 by a train aficionado named Wilford (Ed Harris), the train which at that time was considered useless and self-indulgent. The train is required to be constantly moving to generate energy for life inside, it which circumnavigates the globe on a single continuous track once every year. It is still controlled by Wilford, who has created three separate classes housed in different parts of the train: the privileged "one percent" at the front of the train, the workers who support both ends and occupy the middle of the train, and the "tail people", the masses who live at the back of the train like cattle in a windowless car, fed protein bars made of unknown ingredients. The face of Wilford's ideology to those in the tail end is Minister Mason (Tilda Swinton), as Wilford never ventures to that end of the train. Mason upholds the policies which Wilford has implemented, including taking children from the tail end for an unknown purpose, committing occasional indiscriminate genocide in the tail end, most of the tail people believing as a method of population control, and to demonstrate Wilford’s dictatorial power in an effort to have a complacent populace amongst the masses. There have been many attempts of revolution by the tail people in the past, all quashed by Wilford. Curtis (Chris Evans), one of the tail people, wants to attempt another revolution, believing all past attempts having failed because they have focused on Wilford, as opposed to what he feels needs to occur for power: to take control of the engine at the front. Supporting Curtis in this fight are, amongst others: Gilliam (Sir John Hurt), the wise old man; Edgar (Jamie Bell), who Curtis took under his wing when he became orphaned in the early years; and Tanya (Octavia Spencer) and Andrew (Ewen Bremner), who want to find their children taken away. Along the way, they have to co-opt Namgoong Minsoo (Song Kang-ho), an addict of a synthetic hallucinogen called Kronole, who designed the security system, namely the locking mechanism of the gates between all the train cars. As Curtis and his team try to work their way from car to car from the tail to the front, their priorities are influenced by what they see, what they learn, and by revelations including secrets from their individual pasts.

You can watch Snowpiercer on the surface for the post-apocalyptic action movie some think it is, or you can delve deeper into the religious and political connotations of the plot; class war, global warming, humanities actions, the fact the train is even called an Ark, and I think in either scenario you’ll find something to love. Yes, maybe the CGI, used for what you see from the train’s windows, is less than impressive but since it’s not that important to the film I can forgive it. And, yes, there are perhaps a few western cinema clichés too many, but again only briefly and they don’t take you out of the story, because it is the story and the casting that make this film what it is.

Taking the journey from the slums of the tail of the train, through various different compartments containing often surprising things, with each offering something different visually (the classroom scene with Alison Pill as the teacher is bright, brash, and perhaps shows the indoctrination of children by politics or religion a bit too much for some people's taste) are only workable because of the cast that take the journey. Captain America himself, Chris Evans, is great; straight shooting and revolutionary, no complex dialogue, just brawn and a dream and, as Curtis, those ways of playing really work. Compassion, fear and intelligence are carried by the cast surrounding Evans, with John Hurt, the aforementioned Gilliam, taking the best of the dialogue; lines like “I am the shadow of my former shadow, my day was decades ago” seem almost out of place with the lower classes in the tail section and their almost grunting of lines but it helps to remind the viewer that these people came from all walks of life on Earth before seeking refuge nearly two decades ago on the train. The fear and separation anxiety of Octavia Spencer’s Tanya after her child was taken to the front for unknown reasons help you sympathise with what the trains residents have to deal with, and Tilda Swinton as Mason, one of the venerable Wilford’s Ministers, does what Swinton always does and steals the show completely.

I had never seen any of Bong Joon-Ho’s films before, but this film does an excellent job of taking a French comic, Korean cinema and Western society and blending them into a film that works on whatever level you wish to commit to. The story is perhaps not flawless but it is intriguing, the casting is excellent and the visual look of the film is stunning. Cinematographer Hong Kyung Pyo does an excellent job of keeping everything contained within a claustrophobic train whilst allowing each compartment to bring a different look. A quick final mention must go to Marco Beltrami whose evocative score was stunning throughout.

Got a few hours to spare? Snowpiercer will not be a waste of your time.