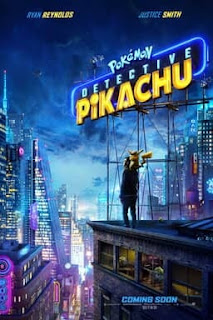 As a long-time fan of the Pokémon series (my first experience was with Pokémon Silver, back around the start of the millennium), I am happy to see a Pokémon movie get such a positive reception from the wider movie-going public.

While I have not played the specific Detective Pikachu game (it is a downloadable game from Nintendo’s e-shop), and thus cannot give an account of how accurately the movie matches the story of the game, I can at least provide the perspective of a veteran of the series responding to this movie.

My personal response is overall a positive one, as I can see how this movie will appeal to various demographics. The children whom the movie is aimed at will simply enjoy seeing the various Pokémon ‘in real life’, as it were, while older fans (like myself) can draw some enjoyment from trying to recognise and name all of the various Pokémon that appear in the film (not the easiest task, given there are now almost 1000 of them!).

Finally, adults who were simply expecting another animated children’s movie can be drawn into the engaging, if somewhat straightforward, mystery plot that the movie presents.

One thing the movie does that I appreciate, is it gives us the opportunity to see a side of the Pokémon world that is always referenced in the games but is rarely actively shown. This is the idea of living with the Pokémon, not as travelling battle partners (though that side is also shown briefly), but as life companions, assisting with businesses, like the street-side food stalls that the Fire-type Pokémon help to cook, or performing roles like directing traffic, or even just as a helpful colleagues and friends.

That is, until Tim Goodman (played by Justice Smith) discovers he can speak (and be spoken to) by a wisecracking Pikachu (voiced by Ryan Reynolds). Tim discovers that Pikachu has been struck by amnesia and is looking for clues that may help him regain his memory. As the only lead to Pikachu’s memory is the name of Tim’s missing father, the two join forces in order to find answers to both of these mysteries.

Another positive regarding Detective Pikachu is that the movie is very impressive from a visual standpoint. The Pokémon all have a very authentic feel, and there are numerous small touches of realism to indicate the actual animals the Pokemon are based upon (such as Pikachu twitching his nose from time to time, in a way that is similar to an actual mouse). This really shows the care and the fun that the crew and producers put into the details of this project.

Now to indicate some of my issues with the movie, which are thankfully very few. To summarise, one of the major points of the movie’s plot involves the movie’s writers taking a few creative liberties with regards to the abilities of some Pokémon. While this might not distract many viewers, as a long-time fan, suddenly hearing that a Pokémon has abilities I could not recall it ever having at any other point in the series did rankle with me slightly, but did not necessarily detract from my overall enjoyment of the movie.

In conclusion, I would recommend Detective Pikachu to both new and old fans of the Pokémon series and would welcome a sequel to see what other ideas and stories may lie in store.