Film - The Spy Who Dumped Me 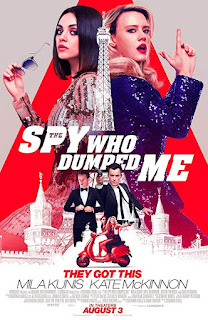 One of the film's tagline says "Minimum Experience, Maximum Damage." Sounds perfect for Steve Taylor-Bryant to watch The Spy Who Dumped Me...

I’ve not been in a place comedy has managed to penetrate of late. Yes, dear readers, beneath these incredible good looks and layer upon layer upon layer upon layer of charm, lies a man that can be touched by the misfortune of life [so, you had a bad hair day then - Ed] and not even SNL sketches or Graham Norton clips on YouTube have helped. I stopped caring about myself, except for my glorious hair of course, and would just watch whatever Netflix told me the rest of the world was watching. Yes, I became *shudders* normal. Still, two hours of some mindless attempt of humour on my television screen passes the time I suppose. However, Netflix chose The Spy Who Dumped Me starring Meg Griffin herself, Mila Kunis, who outside of her Family Guy persona I’ve never really warmed to. Until now, because The Spy Who Dumped Me is glorious.

Audrey (Mila Kunis) and Morgan (Kate McKinnon), two thirty-year-old best friends in Los Angeles, are thrust unexpectedly into an international conspiracy when Audrey's ex-boyfriend shows up at their apartment with a team of deadly assassins on his trail. Surprising even themselves, the duo jump into action, on the run throughout Europe from assassins and a suspicious-but-charming British agent, as they hatch a plan to save the world.

I know the synopsis makes the film sound terrible and, I’ll be honest, it is full of well trodden espionage tropes and set pieces. We’ve seen this film before many times, however the writing this time seems a level above the normal comedic writing Hollywood churns out these days and the casting is impressive. Kunis is very watchable as Audrey, panicking, stressed, overwhelmed, and more of a straight man role than I anticipated it would be, which left Kate McKinnon to do all the humorous heavy lifting and my word is this fine lady a breath of fresh air to the world of comedy! Every facial expression, every line, every reaction McKinnon nails with timing not seen since Robin Williams in his heyday; it’s a master class of knowing how far you can push the boundaries before you lose your audience. Without McKinnon, I’m not sure The Spy Who Dumped Me is any good. Yes, the writing is great and Justin Theroux is in it, but somebody had to grab the film by its horns and ride it out of the straight to DVD obscurity it was heading towards and Kate McKinnon did exactly that.

There is a lot of time wasted watching bad comedies that are billed as smart films, and lots of time wasted viewing jokes for a joke's sake films. The Spy Who Dumped Me, thanks to Kate McKinnon, transcends the usual run of the mill tropes and elevates the project into the really funny. Or I could be wrong and just needed something, anything, to wake me from my personal slump.