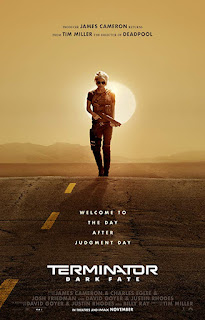 In case you missed it yesterday, catch the trailer for the new Terminator movie AND go behind-the-scenes of the film with producer James Cameron and director Tim Miller...


"Terminator: Dark Fate is the direct sequel to Terminator 2..."

So says producer James Cameron in this behind the scenes featurette.

Other than that, and the fact that the cast includes T2 veterans Linda Hamilton and Arnold Schwarzenegger, alongside Mackenzie Davis, Natalia Reyes, Gabriel Luna, and Diego Boneta, we know very little about the plot of the upcoming Terminator film as yet as no official synopsis has been released. However, here's the first full trailer, which may, or may not, shed some light.

Welcome to the day after Judgement Day, coming to UK cinemas on 23rd October.