Documentary – Prayers to the Gods of Guerrilla Filmmaking 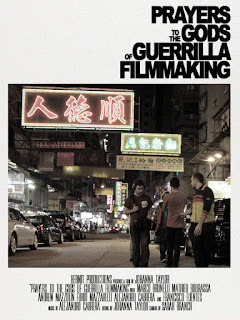 Steve Taylor-Bryant ducks under the radar and watches the documentary Prayers to the Gods of Guerrilla Filmmaking...

“Making a movie is a bit like losing your virginity; it’s harder than you think, it’s not as pleasant and you’re going to see a lot of blood”.

A crew of filmmakers shoot undercover on the streets of Hong Kong with hidden microphones and no permits. The city becomes a giant set as mounting tension and ego clashes push tempers to breaking point.

Prayers to the Gods of Guerrilla Filmmaking is a raw fly-on-the-wall indie documentary following six twenty-somethings, with no money, but big dreams, in Hong Kong to shoot a feature film. It’s also a story of artistic integrity in the face of adversity, and the struggle to realise a lifelong dream in an intoxicating city thousands of miles from home.

There are not many people in modern media that I appreciate more than independent filmmakers, but those select few are producers of documentary films. They often have less of a budget than their fictional and scripted counterparts have, they can’t hide something with make up or CGI, or change a location because something is off, they are bound by the subject matter. They also have to get you interested in something as a viewer that won’t have action scenes, often contain bad dialogue, and they have to find a flow to the project, so it plays nicely. And then sometimes two worlds collide, and documentary film-making combines with independent scripted movies like it has here in Prayers to the Gods of Guerrilla Filmmaking. Johanna Taylor, along with multi-skilled Sarah Branch, follow a group of filmmakers as they embark upon making a scripted feature film on next to no budget in an exotic location with absolutely no permits or permission. This is, indeed, guerrilla film-making at the coal face.

Writer and director Marco Brunelli has a script for his feature The Night of The Great Chinese Lottery and wants to shoot on location in Hong Kong and Kowloon. He has along with him a cinematographer, Francisco Fuentes, and his sound technician, Alejandro Cabrera Zuniga, and three actors that he has never met face to face coming in from different locations. The actors, Mathieu Bourassa who will play Eli, Italian newcomer Furio Mazzerelli who will play Armani, and Andrew Mazzolin who will play Patrick have to live in squalid and cramped conditions in hostels, help to carry all the equipment, learn their lines, perform, not get in trouble, and barely eat due to not getting paid. Three weeks to shoot a feature length film in those conditions. That would tire and frustrate anybody and what Johanna has captured in Prayers to the Gods of Guerrilla Filmmaking is all the tensions that arise as the shoot goes on and there is no sugar coating of events. 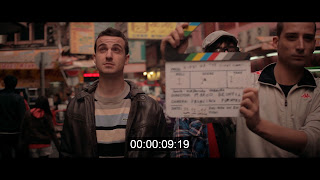 I really like Johanna Taylor’s brand of documentary making. It’s up close, it’s personal, it captures real life as it happens, and it puts you as a viewer right into the situation. What I learned from Prayers is that film-making is just as hard as I imagined it would be and damn if personality clashes shouldn’t be avoided. Brunelli is staunch in his vision for the film, his search for perfection on a zero budget and often illegally is to be admired and, whilst my admiration for him is high, filmmakers like Brunelli need to have more empathy for those they have selected for their journey. Whilst Andrew comes across as a preening idiot that often is too full of himself and ill prepared, some of the tensions that explode between the two men could easily have been avoided if Brunelli just communicated more, was perhaps a little sympathetic to the conditions that lets face it he put these actors into, and realised that not everyone on his project is going to have the same level of passion and commitment as he has. Whilst I think Brunelli should, and needs to, learn some lessons from this shoot I do think that Andrew pushed and antagonised more than was needed and comes across as a genuinely foolish guy that maybe wants fame more than he wants to work.

The living conditions and lack of finance, added to the lack of sleep that everybody has, are captured magnificently by Johanna Taylor and this is most definitely a documentary on film-making rather than a behind the scenes type film. The documentarians are there every step of the way and capture some wonderful moments of sincerity, of self-doubt, of reflection within the entire cast and crew, as well as what you’d expect from all the juicy bits. It has also whetted my appetite to see The Night of The Great Chinese Lottery as I now feel invested in this film and want to see what the outcome of all these stresses produced.

This is documentary film-making of the highest order. It is a great subject matter handled truthfully and is entertaining and informative. Johanna Taylor should be commended for the work she has produced here in capturing real human moments in a trade famous for hiding that by putting up a façade of pretence. If you want an insight into film-making, into the importance of selecting personalities more in keeping with your project and temperament, or whether you just want to see some of the sights of Hong Kong you wouldn’t usually get, then I cannot recommend Prayers to the Gods of Guerrilla Filmmaking highly enough. Raw, intense and brilliantly shot.

Prayers to the Gods of Guerrilla Filmmaking will screen on 12th June at Prince Charles cinema in London, followed by a Q&A, and will launch on Amazon Prime the following day. Book tickets to the screening here https://princecharlescinema.com/PrinceCharlesCinema.dll/WhatsOn?f=11900763