Film - After the Lethargy 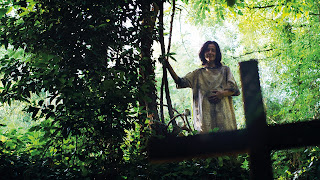 Want to know if you should be bothered about After the Lethargy? Ren Zelen watched the film at Sci-Fi London...

Something nasty is running around in the woods, and I think it may be a script gone bad…

IMDb has helpfully labelled After the Lethargy as Comedy-Horror, Sci-Fi flick - just as well, as I spent much of the 1hr 22min running time trying to work out what the film was trying to do – was it aiming to horrify, disgust or simply amuse me?

The film follows young journalist Sara Hamilton (Andrea Guasch) who is setting out to investigate a large wooded area surrounding a decommissioned, underground, military base in the Rocky Mountains. It is rumoured to be a Roswell-like location where an alien spaceship may have once crashed. It is also the scene of a rash of violent deaths, which the locals insist are the result of attacks from aggressive bears who, unique to their species, appear not to need to hibernate.

As Sara prepares to leave, she is interrupted by a phone call from her mother (Lucy Tillnett) who is shrill and vaguely intoxicated but concerned, and who half-heartedly attempts to dissuade her daughter from searching for aliens. (An entirely forgettable scene as the mother is never referred to again nor the relationship ever expanded).

Sara has been lured into investigating the mystery by viewing a ropey documentary, ‘The Tetis Files’ found on a mysteriously delivered videocassette. (Were I her, I might be slightly sceptical, as the documentary’s fevered host (Mark Schardan), seems to get a major fact about the history of astronomy wrong in the first few minutes).

Sarah arrives in the woods shortly after a tetchy local police officer (Julius Cotter) confirms the occurrence of a “86-Code” – the savage killing of young pregnant woman. Oddly, no-one asks why the unfortunate girl had been running around the woods in bare feet and dressed in a grimy surgical gown.

Sara is welcomed by the jovial Joe the Ranger (Joe Manjón), who is keen to guide her to the deserted military base. Subsequently, the pair spend a lot of time wandering around the woods and derelict tunnels of the decommissioned base while being followed by a limber, wall-crawling CGI insecto-alien. 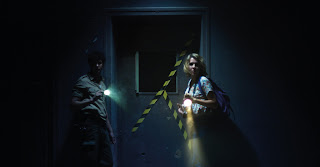 They stumble across Ed, (Ramon Canals), the large, inarticulate, semi-feral (and according to Joe, harmless) son of deceased mad scientists who conducted evil, unofficial experiments down in the basements of the ruined building.

Meanwhile, female cop Sam (Liliana Cabal) and her male partner (Ben Vinnicombe) are patrolling the area in their squad car having a laboured conversation about how death can strike at any time. It is particularly laborious as her partner (although apparently a childhood friend) speaks with a near incomprehensible accent which veers between Aussie, British and ‘Gone With the Wind’ Southern gentleman. It’s easy to miss some of the things being said, but you know what? It hardly matters. Maybe it’s meant to be funny?

Then, not a moment too soon, the unintelligible male cop gets brutally murdered as he steps out of the car and starts snooping around the woods, while the unfortunate Sam is bonked on the bonce by someone and dragged off.

This film doesn’t seem to have much regard for any kind of authenticity. Joe the jolly ranger boy gets a nasty leg wound off-screen (although he never really explains how) but continues to hop around happily giving Sara a tour of the base before sitting down in Ed’s filthy trailer-home to chat and sew the gash up. He doesn’t bother to clean or disinfect his own filthy wound before or after the procedure, then abruptly dashes off leaving Sara to cope with noisy alien visitors.

Everyone gets excessively dirty very quickly and everyone is at pains to seem cryptic. Some of this weirdness might be explained in retrospect (after the fairly predictable ‘reveal’) but what is really silly is that ‘journalist’ Sara could be so dense as to fail to notice that the whole scenario is clearly unhinged, and realise that she should get the heck away from these assorted idiots pronto. No, instead she sticks around, clinging on to jackass Joe, and suffers the inevitable dire consequences.

Spanish writer-director Marc Carreté made a strong debut with the possession movie Asmodexia (2014), and the short Mal Cuerpo, but this stab at an alien encounter picture is not his finest moment. He knows how to handle a camera but appears to have less idea as to how to build tension or a credible plot.

Little in this film properly ties together and it’s full of non-sequiturs. People wander on and off screen - we never really get to know why or what it is they’re going off to do. Female cop Sam’s plot never quite intersects with Sara’s, characters jump in and then disappear.

To explain what plot there is we have a maniac nurse (Sue Flack), the erstwhile irritable cop and the loopy host of the documentary, who all eventually get scenes when they awkwardly launch into some kind of exposition, making the film occasionally seem as unbalanced as its characters.

The pacing and tone are all prone to alarming, erratic jumps – the horror scenes are bloodily gross and quite honestly, the premise of the actual film, which deals with the abduction, imprisonment and the forcible impregnation of young women, isn’t funny at all. The horror element opts for yet another plot in which tear-stained, bedraggled women are beaten and chained up in a basement and inseminated or raped on filthy mattresses. Sadly, I fear some of this might have been meant to be amusing.

On the other hand, I can confidently say that the script and the acting are often risible. To be kind, I shall put this down to the dialogue having been written in a second language, but the acting is so stilted and strange it almost goes into parody, which some of the time I suspect it was.

It’s not even clear what the title After the Lethargy means. Is it something to do with the beast from another world being aroused into action, or does it refer to the poor women waking to horrors after they’ve been drugged or incapacitated? Possibly, it may simply be the realisation of the viewer that they’ve spent nearly one and a half hours of their lives watching this dire stuff.