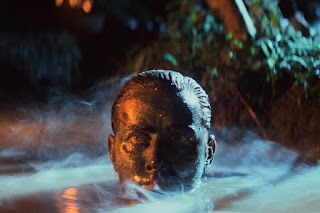 To celebrate the 40th anniversary of the Oscar-winning Vietnam cult war epic, Studiocanal will release in cinemas this summer a fully 4K restored, never-before-seen cut of Apocalypse Now on 13th August...

Restored from the original negative for the first time ever, by Francis Ford Coppola himself, to the highest and finest audio and visual standards for a truly visceral cinema experience, this is said to be his most realized version of his multi-awarded classic - a haunting journey into madness that fascinated generations of movie lovers.

Apocalypse Now was nominated for 8 Academy Awards® (including Best Picture) and won 2 Academy Award® for Best Cinematography and Best Sound, 2 BAFTAs for Best Direction and Best Supporting Actor and the Palme d’Or in Cannes.

Starring Marlon Brando, Robert Duvall, Martin Sheen, Dennis Hopper, Laurence Fishburne, and Harrison Ford, the film follows Army Captain Willard (Sheen), a troubled man sent on a dangerous and mesmerizing odyssey into Cambodia to assassinate a renegade American colonel named Kurtz (Brando), who has succumbed to the horrors of war and barricaded himself in a remote outpost.

Find out more and book your tickets now: https://www.apocalypsenowfilm.co.uk