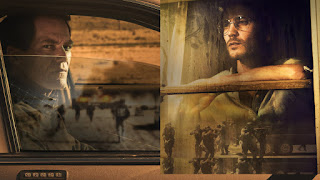 UKTV is set to screen the hit US mini-series Waco on the crime drama channel Alibi this summer...

On February 28, 1993, the eyes of the world suddenly converged on a small religious community just outside Waco, Texas when the FBI conducted a raid on charismatic cult leader David Koresh (Taylor Kitsch) and his devoted followers. After what became the longest fiery gun battle in U.S. law enforcement history, four agents and six civilians were left dead, and dozens more were wounded. 51 days later, a fire engulfed the compound, killing 76 men, women and children inside.

What transpired over those 51 days remains one of the most misunderstood stories in American history. Waco has come to evoke different ideas to different people -government recklessness, religious fanaticism, conspiracy theories, and cover-ups. But what really happened at Waco?

Emma Ayech, channel director for Alibi said, "Waco is one of the most thrilling and tense series I've seen in a long time. The performances from Taylor Kitsch and Michael Shannon are in a league of their own and bring out the previously unseen human side to this infamous story. We can't wait for our viewers to see this Emmy-nominated event series as we continue to offer bold, new and exclusive stories for Alibi audiences."