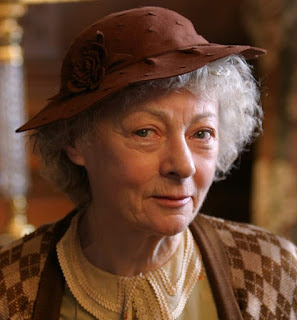 In a series of articles, Susan Omand and Steve Taylor-Bryant are going to remember the policemen, spies and criminal specialists that entertained them over the years. Today, Steve sets the net curtains twitching with the TV adaptation of Agatha Christie's Marple...

I used to love watching television with my Nan years ago. She would turn even the most pedestrian show into an event with her acerbic wit, aimed mainly at the advertising executives who dared interrupt Emmerdale Farm, but everything was a heightened level of enjoyable once my Nan got going. One of the shows we enjoyed together was Agatha Christie’s Miss Marple in the late 1980’s, starring the wonderful Joan Hickson in the title role, who had a sharp mind but a cutting tone to match. She was basically my Nan just with slightly fewer homicidal tendencies, but the show was great. Then I grew up, my Nan got older and eventually lost her marbles before passing and I never thought much about Miss Marple again. Until recently when ITV3 started reruns of Agatha Christie’s Marple, the one from about 2004 that I missed first time around because I expect the pub was open and the gin was flowing (it wasn’t just my extreme sarcasm I inherited from my Nan, the ability to drink gin is strong in our DNA).

Now, I’m not a big reader of older books so, except for a couple of the famous Poirot titles, I’m not that familiar with the work of Agatha Christie on the page. I’m more of a fan of the visual and have liked most of her stories on screen, including Kenneth Brannagh's glorious moustachioed train one. Therefore, unlike most other Christie fans, I cannot tell when an episode drifts too far from the original text which, after many discussions with folk about this newer Marple, appears to be to both my and the show's benefit. When it first aired, the audience apparently didn’t warm to Geraldine McEwan’s portrayal of Miss Marple, comments included ‘too cold’ and ‘sharp tongued’ and ‘uncaring’ and there was problems with the stories veering off from what fans were expecting so, of course, I bloody loved it!

As with any half decent British drama, Agatha Christie’s Marple attracts the best of Britain’s acting fraternity and each episode contains multiple stars that you would pay good money to watch paint a wall. From Ian Richardson, Joanna Lumley and Simon Callow in the first episode, The Body in the Library, through Niamh Cusack, Keeley Hawes, Zoe Wanamaker, to Benedict Cumberbatch, to Wendy Craig, the cast across six series was impressive. But still, those first few series with McEwan as Marple weren’t universally loved. Not having that textual knowledge here is a huge positive as I was watching a fantastic detective show with an older actress who reminded me of my Nan. McEwan was brilliant at saying something mundane or sympathetic but the twinkle in her eye made you realise she was paying some idiot lip service whilst her brain was working overtime to make sure this simpleton got the rope. She was ruthless, dogged in her determination to work out the puzzle and did so with some probably unplanned sarcasm. The stories were excellent and flowed well giving every luminary in the cast their moment to shine before McEwan made us all feel bloody stupid. It may not have followed the books enough for some but when you get to the end of a mystery and are made to feel dumb for missing something so obvious then the script has done its job. Even Herbert Lom has to come up against a detective far more intelligent than the french idiot he was used to, twice if you include a voiceover he did in the later episodes.

Then Marple was changed and Julia McKenzie was drafted in, a fine actor, but if McKenzie is closer to the Marple in the novels then her episodes aren’t a great advert to get me reading the original text. The episodes seemed slow, Marple nowhere near as involved, or as smart with the conclusions often coming out of left field with strange workings out. It probably didn’t help that, in McKenzie’s first episode, A Pocketful of Rye, Marple is hardly involved for over half of it which made the change hard to grasp and, by the time further episodes appeared, I’d already become bored. McKenzie may very well be Marple, but McEwan was my Nan, cutting, clever, funny, perhaps a little too sarcastic.

I’m sure fans of the original Christie stories are happier with the later episodes, the calm and compassionate pensioner who somehow manages to solve crime but, since my ideal casting choice would be Dame Judi Dench with her Bond ‘M’ moodiness and serious attitude, I find McEwan utterly perfect and just how I want my bored old ladies to be.