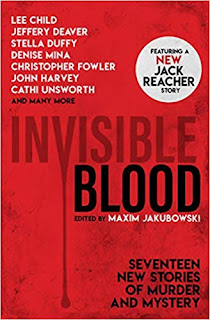 Open the files on an anthology of seventeen new crime stories that probe the brutal and complex hearts of criminals, and unravel the most riveting of mysteries. Watch as a secretive group of intelligence community officers trace Jack Reacher through Heathrow in Lee Child’s “Smile”. In Mary Hoffman’s “Fallen Woman”, a journalist on the trail of a secretive drug lord gets caught up in the violent suicide of a young woman in Siena. And in Jeffery Deaver’s “Connecting the Dots”, detectives follow the trail of clues in the brutal killing of a homeless man, wherever it may lead… Invisible Blood is a gripping collection exploring the compulsions of the criminal mind.

About the Editor: Maxim Jakubowski is a noted anthology editor with over seventy volumes to his credit. A publisher for over twenty years, he was also the co-owner of London's Murder One bookstore and the crime columnist for Time Out and then the Guardian. He is currently the Vice Chair of the Crime Writers' Association and a Sunday Times bestselling novelist in another genre.

Invisible Blood is published on 23rd July by Titan Books