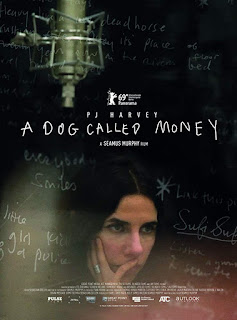 Coming to Sheffield Doc/Fest, Steve Taylor-Bryant sees an album be created as he watches the Seamus Murphy documentary about PJ Harvey, A Dog Called Money…

PJ Harvey, one of my favourite singer songwriters, followed Irish photographer Seamus Murphy to Afghanistan, Kosovo, and Washington D.C. Her aim was to get the inspiration for a new collection of songs which were to be recorded in the basement of Somerset House as part of a recording art installation where fans could view the process of making an album, but the musicians couldn’t see or hear them so wouldn’t be disturbed. A Dog Called Money was so much more than just a documentary following that journey, it was more a piece of art in its own right.

You see A Dog Called Money is not strictly a documentary in the sense of what you expect a documentary film to be, it is more, like a song, a collection of visual musings that whilst photographed in a raw yet beautiful manner has no real cohesion or narrative structure. Much like a musician putting together an album it jumps about and feels somewhat unfinished in places yet polished in others and is stunning to look at but if you don’t have some clue about how artists work then it would be easy to get lost watching. If you want an insight into the chaotic mind of artistry though then it is absolutely fantastic.

Seamus and Polly Jean Harvey visit the war-torn areas of Afghanistan, and witness the devastation still left in Kosovo and whilst these images are heart-breaking and sad, and obviously a great source of material for the song writing I expected what I saw. I have seen enough films about Kosovo in the past and know enough service personnel that have served in Afghanistan to not be shocked by any of what I saw, but still marvelled at how those images and those people passed on the street or abandoned made it into songs on the album, like Dollar Dollar. Where the film really gripped me was within the sections where the crew are in Washington D.C. the worlds most powerful city. From the slums of South East Washington and young street rapper Lil’ Paun, whose dog is the titular Money, to the glorious leafy suburbs in the North West, to the white stone fortresses of ultimate power, the ride through Washington D.C. was eye opening. The skin colour and financial divide in the world’s most famous capital makes we wonder what having all that power is for if you cannot even fix the city in which your purport to fix the world from, there is no attempt to heal these divides and to see a Western powerhouse underneath its glossy exterior was something I won't ever forget and, filled with shame that I hadn’t sought out these stories for myself in the past, I am partially responsible for these forgotten people and their plight.

The elements of the film that were set in Somerset House for the recording are extraordinary, as a musician myself I was awe at the creative buzz that filled that room at all times as this project started to take shape and as soon as, I had finished the film, I found as many of the songs as I could to keep my brain in that creative place. What Seamus Murphy and PJ Harvey have created together is wonderful but like any good piece of art and music it leaves its meaning open to interpretation. My interpretation of A Dog Called Money? Western “democracy’s” effect on the world and those living in its aftermath.