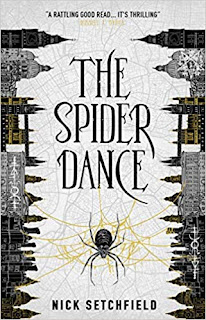 From Nick Setchfield comes the follow up to The War in the Dark, an intense drama combining espionage and fantasy with historical fiction to create an action-packed adventure, published next month by Titan Books ...

Read Steve's review of The War in the Dark

There was a human heart in a locker at St. Pancras station. Christopher Winter came to collect it on a Thursday afternoon in early summer…

It's 1965 and Christopher Winter is trying to carve a new life, a new identity, beyond his days in British Intelligence. Recruited by London’s gangland he now finds himself on the wrong side of the law – and about to discover that the secret service has a way of claiming back its own.

Who is the fatally alluring succubus working honeytraps for foreign paymasters? What is the true secret of the Shadowless, a fabled criminal cabal deadlier than the Mafia? And why do both parties covet long-buried caskets said to hold the hearts of kings? Winter must confront the buried knowledge of his own past to survive – but is he ready to embrace the magic that created the darkness waiting there?

The true cold war is fought on the borders of this world, at the edges of the light. The Spider Dance continues the thrilling series that began with A War in the Dark, continuing the exploration of Winter’s identity, and what it truly means to be human.

Nick Setchfield is a writer, editor and entertainment journalist whose work has appeared in SFX and Total Film. He's also been a film reviewer for the BBC and a scriptwriter for ITV's Spitting Image. He lives in Bath.

The Spider Dance is published by Titan Books on 16th July