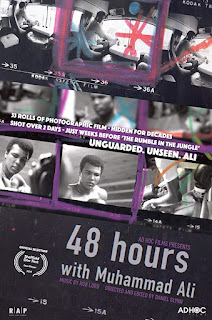 Steve Taylor-Bryant discovered a knockout short documentary in 48 Hours with Muhammad Ali, thanks to Sheffield Doc/Fest...

On August 11th through 12th 1974, Brooklyn local photographer Peter Angelo Simon was invited to experience the private world of one of the most famous people on the planet as he prepared for the biggest challenge of his life. The person in question was Muhammad Ali who would soon be attempting to regain his world heavyweight title. A title stripped from him, punishment for his refusing the Vietnam draft seven years earlier. His opponent was to be the brutal, undefeated George Foreman. The venue, Zaire, Africa. The fight would be dubbed "The Rumble in The Jungle". In an intimate, stream of consciousness, Peter reveals in words and extraordinary photographs, what happened during his unique 48 hours with Muhammad Ali at his private retreat, deep in the Pennsylvanian countryside; a place dubbed 'Fighters Heaven'. He shot 33 rolls of film. What he captured reveals aspects of Ali's fascinating character not previously or since seen. Most of the photographs appear on film for the very first time. Peter, in his New York studio, discusses his process, his impressions of Ali, the legacy of this monumental moment and the allure of photography to us as human beings and as an art form in its own right. Few photographers got as close to the boxer behind the legend. This hypnotic and dreamlike film reveals the preparation for a seminal moment in cultural and political history and is a fascinating insight into the creative process of an American photographer of significance.

The last line spoken in 48 Hours with Muhammad Ali is “I captured an extraordinary person in a unique moment in time” and my word didn’t Peter Angelo Simon do just that. I love boxing, I watch a lot of documentaries, some even by the filmmaker here, Daniel Glynn, but when you watch boxing films you tend to get a focus on the fight, or the flamboyance, or the result, or whatever controversy has occurred. When you watch films about Muhammad Ali, they are full of the huge character and his famous quotes but with 48 Hours with Muhammad Ali the only words you’ll hear are those of photographer Peter Angelo Simon and it’s the photographs of Ali that do the shouting. Simon used 33 rolls of film in his two days with Ali, Ali commented that he had never seen anyone take so many pictures before, and the magazine that had sent Simon used only three so for all these years the photographs taken have been archived away, kept from the public eye.

Peter Angelo Simon comes across as a man who loves his job, his passion for his artform seems genuine and its wonderful to see the smile on his face as he remembers what led to each picture, but I took most from the film is that this is the most human I have seen Muhammad Ali ever. There is no posing, no acting, no showing off. Ali isn’t on duty as the worlds biggest star here, this is just a man and the photographs add something powerful to the Muhammad Ali legacy. At around a run time of 16 minutes there is no excuse for anyone to not watch 48 Hours with Muhammad Ali. If you are a fan of boxing, a fan of Ali’s, a fan of photography, of art, or of well packaged and well-meaning documentaries then this film demands your attention. Short documentaries are often good but rarely scratch the surface of their chosen subject matter, but 48 Hours with Muhammad Ali manages to capture the essence of the worlds greatest ever sportsman and explain him as a human being in little over a quarter of an hour and for that Daniel Glynn needs applauding.

The photographs are magnificent, Peter Angelo Simon a warm and compassionate man, the film a powerhouse of memories.

Sheffield Doc/Fest is on until 11th June. Find out what's on and book tickets.