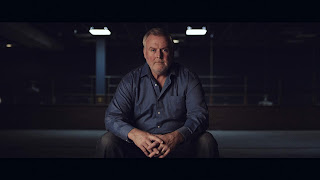 
Stuntman. Actor. UPS employee. Former WWF wrestler, Disney World performer, and NFL nose tackle. Brian Donahue has seemingly done it all. The Guy is a short documentary film chronicling Mr. Donahue's surreal story as he tries to strike a balance between paying the rent and seeking out the elusive Hollywood spotlight.

E.J. McLeavey-Fisher’s film immediately struck a chord with me when I read the synopsis. Not only am I a huge fan of stuntmen and their craft but I am old enough to remember when Brian Donahue wrestled under the moniker of The Dublin Destroyer so I couldn’t wait to give this film a watch. However, I am not sure how the film has left me feeling. Brian comes across as a great guy, a natural talker, a likeable man, someone you’d be happy to have as a pal, and there is no doubt from the clips of his work in the film that he is a hard and professional worker, always grafting, always looking for a line or a slightly bigger role and whilst that is an admirable trait it does leave me wondering if perhaps Brian Donahue shouldn’t just give up. A quandary I am sure he and his wife Lori have been through and certainly none of my business, but parts of this film made me really sad for him. To get that physically hurt, to have to get job after job just to make rent, but still to be chasing your big break when you are no longer a young man makes me wonder how I would react in the same position. Wondering, along with your neurologist, whether you have caused yourself brain damage is where I would have to have a serious thought. Probably I would jack it all in, but then maybe I don’t have the drive it takes to make it anyway.

But that is what this film is about. It is about a man who had a dream and despite the ups and downs has never wavered from that dream. There is something admirable in that, my respect for him is high and my doubts earlier are more the doubts I would have, because I am not as strong as Brian Donahue. You may not know the name Brian Donahue, you are probably too young to remember The Dublin Destroyer, but when you watch the clips from the films and television shows you will recognise him.

The documentary itself is a very well-made film about a very interesting guy, The Guy as David Letterman called Brian Donahue, full of great clips from his career, glimpses of his home and ‘day job’ life, and watching him work has been my honour.