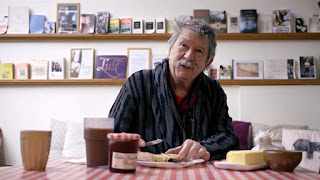 Tony Cross got a life lesson as he watched the documentary Meeting Jim by Ece Ger, on recently at Sheffield Doc/Fest...

I’m going to start this review with a little bit of personal stuff that you can skip should you be that kind of reader. The reason I’m starting with this is because I think it is an important factor behind my reaction to this film or at least I think so. I’ve been ill for a short while and because I’m 48 and in bad shape my mortality has become horribly real and my apparent lack of achievement a stick with which to beat myself. But this film, about this man, has been a shot of positivity that I’ve been needing without realising it.

Jim Haynes isn’t a name I was hugely familiar with but he was a key figure in British counterculture in the 50s & 60s. He opened the first paperback bookshop in Britain. This was in Edinburgh. The bookshop was also a club (to get around the silly censorship of theatre that in the UK then revolved around the office of Lord Chamberlain.) That club contained the Traverse Theatre. He ran events there that sowed the seed for the Edinburgh Fringe. Then he moved to London and was involved in the foundation of the International Time, the club UFO & the London Arts Lab. Then he went to Paris – where he still lives – and taught Sexual Politics at the University of Paris. There was the sexual freedom magazine ‘Suck’, the first ever Wet Dream Film Festival in Amsterdam. And, in 1978, he held a party at his apartment in Paris. A party that has continued to happen every Sunday since. He’s had 130,000 guests attend.

He knows everyone, everywhere. He sees himself as a citizen of the world – and he was involved with ‘World Passports’, which he printed off and people travelled on. This is man who has address book – mostly plural – for every country in the world. This man is social media before social media existed. And he seems very nice.

Now, whether he is as nice as he seems is something that this documentary isn’t intended to explore and at this point, I don’t care (and in some respects I don’t want to know.) What I found inspiring was that he did things. He didn’t pontificate. He didn’t sit on his hands hoping someone would come and help him do his thing. He did them. He asked. He met people and provided them with places to do their thing and mostly he tried not to say no to people.

The production team do a fantastic job of telling this story either through Jim himself or through some of those thousands of people he’s met over the years. He seems to have managed to hold on to the best ideals of the 1960s without becoming cynical or jaded.

The film follows him from Paris to Edinburgh to London and back to Paris again. There’s a moment when he says that people ask him if he’s ever going back to New York or London or wherever and he says you can never go back. You’re always moving forward. And that seems to be a key part of how he sees the world.

I found the whole thing a real pleasure. I thought here is a man I could happily sit down and spend some time talking to but most of all here is a man that did things and never stood still. He’d move on and do something else.

The final couple of minutes when he reads from a letter to his granddaughter, which basically outlines his view on the world, is something I’d like to remember, although I won’t because I haven’t got much of a memory even at the best of times.

Now, I’m worried as I write this that I’ve let my personal circumstances override what passes for my critical senses and that my enthusiasm for Jim’s way of seeing the world might push you into seeing this film and you’ll think ‘what the hell was that all about?’ Well, that’s the way the world is. I loved this film. I can’t recommend it highly enough.