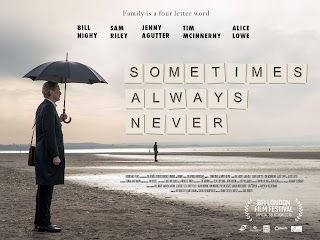 
I normally start my reviews with some kind of synopsis, or overview, but instead I’m just going to point out all of things that I liked about Sometimes Always Never and let you watch the film for yourselves, as a synopsis would not do the ingenious writing any favours at all, this film cannot be boiled down into a brief sentence. This is a story about family, about loss, and grief, and hope, and strain, and it always comes back to Scrabble. Bill Nighy as Alan is a man of words and facts, much like my grandad was and, in every conversation, he has a titbit of useless knowledge to share, and with all the memories that he is involved with in this film they all somehow link to a game of Scrabble. Alan has been searching for his missing son, Michael, for a while and along with his present son, Peter (Sam Riley) the film starts with a body to be identified. This terrifying and incredibly dark subject matter, doubled up with the fact that a couple in the Bed and Breakfast Alan and Peter are staying in are also there for the same reason, is quite an emotional one for a filmmaker to take on and films with this type of tale to tell often drift seemingly into the morose, understandably, but morose is always hard to watch. So how do you lift the doom and gloom and allow the audience to connect with an obviously tormented family but in an entertaining way that allows moments of brevity and anecdotal memories to become the overriding factor on the screen? Scrabble.

It seems strange to keep mentioning a word game, but the film really does always come back to it. Whilst waiting for the morgue to open so a body can be identified, Alan joins other couple Arthur (Tim McInnery) and Margaret (Jenny Agutter) for a game of Scrabble, with a side bet of £200, and you as a viewer learn so much about Alan’s life in this scene. Funny, devious, sad, knowledgeable and yet annoying, and the strained relationship with Peter. Scrabble comes up again on the drive home as the reason for the strained relationship between father and son becomes clear as Peter questions his father as to why they spent their childhood with poor substitutes. Scrobble instead of Scrabble, Revell not Airfix, Action Joe instead of Action Man, all by themselves not quite a damning indictment of a childhood but it does point towards Peter thinking he is the poor substitute son, the one that is there whilst prodigal Michael remains missing.

A lot happens in Sometimes Always Never but without ever feeling like there is a lot to take in. It is a story of family and of dysfunction, but also of relationships rebuilding but none of the events and emotions portrayed feel forced, played out by a perfect cast in the most natural of ways. There is many highlights within the film, Nighy is superb as you would expect from such a seasoned performer, the scenes involving Tim McInnery are just glorious and when he sings Bonnie Tyler with Jenny Agutter you’ll honestly feel like your entrance money was well spent, but as good as the ensemble are it is the writing and filming that allow for such a rewarding viewing experience.

The film is lit, in the first half at least, like a theatre would be in a play and it is almost like watching a stage performance, there is a closeness to the performance that is difficult to give a viewer through the medium of cinema. There is interesting camera angle after interesting camera angle and the visuals almost become a character in their own right. Shots through bushes, through windows, from mirrors, added to a gorgeous colour pallet means Sometimes Always Never is a feast for your eyes. It is Frank Cottrell Boyce’s script that takes all the credit for a fantastic film though. It is just such elegant storytelling, it is emotionally taut whilst light and uplifting, and the characters are so rich and involved that nobody on the cast could be considered peripheral. The use of words and Scrabble anecdotes are clever and perfectly placed to drive the narrative and change the mood, but also to connect every character to each other. Peter may feel like a poor substitute but as an audience member you will not. Elegant, moving, and aesthetically pleasing, surely a must see for all.