Film - Ashes in the Snow 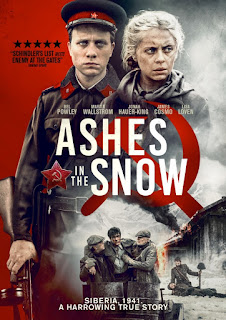 Inspired by true events, watch the trailer for Ashes in the Snow, out on DVD and Digital next month from Signature Entertainment...

Based on the best-selling novel Between Shades of Grey, the harrowing true story Ashes in the Snow follows a 15-year-old girl who is deported to Siberia during the Soviet occupation.

As Stalin’s troops tear through the Baltic regions, an aspiring young artist Lina (Bel Powley) and her mother (Lisa Loven Kongsli, in a standout performance) are forced out of Lithuania to work in a Soviet labour camp. Separated from her father, Lina risks everything by using her art to document her experiences, in the hope of letting her father know that she is still alive.

Starring Bel Powley (The Diary of a Teenage Girl), James Cosmo (Game of Thrones) and Sophie Cookson (Kingsman), Ashes in the Snow is a beautifully executed yet heart-breaking, captivating and eye-opening war thriller that unveils a forgotten part of history in a way that makes you experience the despair and shocking conditions of the Soviet labour camps.

Signature Entertainment presents the spectacular WW2 set Ashes in the Snow on DVD and Digital HD from 15th July.