Film - Behind the Scenes 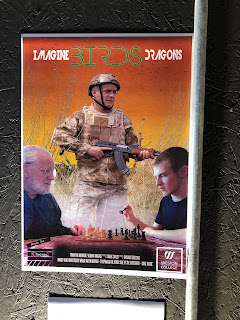 Steve Taylor-Bryant discovers there's more to making a short film than meets the eye. Like running. Lots and lots of running...

I’ve been reviewing films for nearly a decade, independent productions for the last seven, I even invest money in films when my gin account allows because I love film. However, I never had aspirations to be involved in the industry as a big shot, I didn’t dream of being an actor or a director. I wanted to be a stuntman until the fact I’m a massive scaredy-cat came to light and prevented me becoming Colt Seavers. All I can do now is sit back and marvel at the people who challenge themselves to get their dreams made and try to be fair in my appraisals of their work if they ever get a release. I say this to show that I have absolutely no clue about what goes into making a project for the screen... until now.

Talk about getting a harsh lesson in the realities of film-making at the coal face. My son, Kraig, is just finishing his second year of media at college and, after a restful summer, will start his university degree in all things lens based. To complete his college course and qualify for university he had to do a final major project based around the theme of “moments”. He decided to look at aspects of life where Loss is the moment and set these scenarios to music in the form of a pop video. He wrote many different drafts of ideas, picked the song Birds by Imagine Dragons (people my age, ask your kids), and went about writing a camera script and a way of getting his ideas into visual form. With no money. With a hired camera and the time constraints that come with that. With little or no crew or support because everyone else was in the same boat. Those early weeks saw many conversations and calming sessions as we watched Kraig put himself through the ringer. Certain storylines wouldn’t work, certain storylines involved a cast he just couldn’t find or afford, time was running out. He found Peter, the older gentleman in the video and, with his producing cohort Mark Tapley taking a role as Peter's grandson, he had the crux of half a story to work with and set about trying to find locations. Not an easy thing to do with no permits, permission, or money but they somehow pulled it off and I was beginning to see how hard being a filmmaker could be, my eyes were opening.

My eyes opened big time with Kraig's second storyline of a young boy who loses his dad to war wondering if he’s ever going to come back. I mean how do you even film a war on a college project? Turns out you butter up your dad, make him feel like a star and then hope he’ll buy himself a couple of hundred quids worth of army gear and run around like a prat for a day. And that I did. Film-making involves so much running. And I loved every egotistical minute of it. I got to play dress up, play soldiers, spend time with my youngest son on set, and proudly watch one of my older boys completely ignore the fact I am his father and bark instructions at me all day and make me run. Have I mentioned how much running is involved? Running that doesn’t even make it into the finished film?! What’s the point of running if you don’t need to? I need a better agent.

Despite making me run, I was impressed by how knowledgeable these kids were about camera angles and lighting and location and what they wanted from their inexperienced cast. Both Kraig and Mark worked their proverbials off producing something magical from not very much and hopefully both will go on to great film-making careers, Kraig especially as I want 10% of future earnings just for making me run.

In conclusion - film-making is difficult at every level, if you get the chance to support a filmmaker or something similar take it because the experience is certainly worthy of your time and money. And running.

Editor's Note: The film below has no dialogue and has had to have the music track removed for copyright reasons but you can still watch the story (and see the running). The music should be the Imagine Dragons song Birds - listen to the song here.