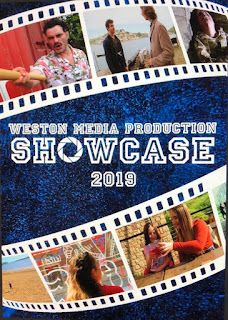 Kraig Taylor-Bryant cast an eye over some of his classmates' work at the Weston College Second Year Media Production Showcase recently...

After seeing both the UCW showcase and the incredible work that those in my own college group had done, I felt intrigued and inspired to write about the variety of projects that were displayed at this year’s Weston College second year showcase. Projects such as experimental music videos and short films were what truly intrigued me, and the morals that I took from each one were particularly powerful.

One of the music videos that intrigued me the most was “Raspberry Beret”, a music video produced by Chloe Bailey (and acted out by Jess Vernon and Josh Hodge). This video was a complex mix of narrative style and performance style video with one slight twist at the end. The performance aspect of the video, to me, made it out to be about a man who was reflecting on how he met the girl who he is currently in a relationship with. What the video does is make you think this, before revealing at the end of the narrative side of the video that it was actually a man reflecting on his regrets of not asking this girl out to dinner. I honestly thought this had a very powerful message behind it of taking the chances that you have in life, especially when it comes to taking a chance on a girl that you have a crush on. So, what makes me think this? Well it’s because at a point in the video we realise that this girl has fallen for somebody else, because the main character in this narrative didn’t take the chance that he had to ask the girl if she’d go on a date with him and was left with only a ‘Raspberry Beret’. I think this video was clearly about relationships, and how being confident enough to approach a person is important, and I think this makes it both a comforting video, but also a sad one, because of the sympathy we feel for the character in the narrative. The concept behind this was clearly well thought out, and Chloe Bailey, as a creator, is definitely someone to watch out for in the future.

Speaking of music videos, there was one particular experimental one that was also about relationships, except this was more based on the darker side of them. This video was titled Bury a Friend and was produced by Jemma Green. The video begins with a message on a phone telling them to “end it”, so we can assume that they’re telling this person to kill themselves. This hooked me in to this story from the beginning. Whilst I was definitely confused during the first watch, this is what made me want to watch it multiple times. The video includes scenes of a man in a mask (we can assume), standing behind a girl who’s clearly uncomfortable, as well as scenes of a man digging a hole in the woods, which, judging by the title, made me think that perhaps he is was burying someone. As I watched the video a third time, I started to notice the prevalent use of snakes, which I started to think must have some significance. I believe that this means that the guy in the video is figuratively a “snake” in a toxic relationship, and perhaps the message at the start of the video was sent by the guy in the mask, therefore being a snake by going behind his girlfriend’s back. There also seems to be scenes where the guy is dragging his girlfriend around, and even chasing her when she tries to run away, that made me instantly believe that there is some kind of toxic relationship theme, and the fact that the video ends with the message “Be careful who you fall for”, made that all to clear to me. Any creator who is able to make a video/film like this that you just have to watch more than once, to see the full picture, is a name that’s worth keeping an eye on for future careers. 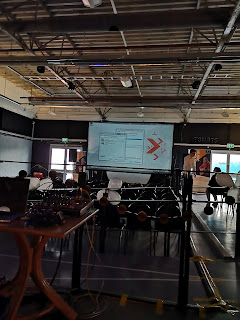 Another project in the showcase that seemed to somewhat experiment with their story was “False Perception”, a project that was led by Luke Pincombe. This is a short film that is all about a man by the name of Max, who seemingly has some kind of mental health problem (which the welfare officer calls a type of “psychosis”) as he is constantly called into the welfare office, without him even knowing why. When he meets a girl named Ella, who comes into the college/school from London, Max says that he feels happier having this girl around though when he spends more time with her it seems like he starts to hate everyone else around him. It’s interesting in moments of the film where Ella tells him things such as that he “can’t trust anyone”, which obviously encourages him to spend more time with her, that with anybody else. This also makes the welfare officer question him having any friends at all, because he keeps pushing them away. It’s interesting to see how Max’s psychosis develops to a point where Max says that he doesn’t even know how he feels, and eventually this leads to the revelation that Ella isn’t actually real at all, but a total figment of his imagination.

The short film cleverly cuts back to the moments where we see Ella interacting with Max, taking Ella out of the shot completely, showing the moments where people are actually making fun of him because Max isn’t talking to anyone in these scenes. I think the initial shots of that scene, where it seems as though his classmates are bullying Max, are to make us think that everyone is just being horrible to him, and calling him crazy, when to him, they’re all just being horrible for no reason. Though when we realise the truth, we start to see why everyone is treating him this way and start to understand how he truly does need help. This film had a clever message of keeping an eye out for those that might have issues with their mental health, and this is what helped me really appreciate it, and I think it helps the viewers to understand what someone suffers through, when they do suffer from a form of psychosis. Luke Pincombe truly created something different with a great plot twist, and it’ll be interesting to see where his career and the careers of those he worked with on this, go next.

The short film that I personally found to be the most emotional of all the projects at the showcase, was “A Moment in Time” that was produced by Megan Holly and Lisa Williamson. This love story is set in both 2019 and 1978, and first raises questions for us at the start, showing an older couple, not talking to each other and clearly feeling sad about something. It then cuts back to the past to introduce these characters properly, though when they were younger, Adrian, who is visiting the bookstore of a now younger Felicity. She ends up leaving a message in the book that he buys from her to introduce her name to us, and make it play a significant part in their love story both at this point and later in the film. We’re then led to be introduced to Adrian’s friend Theodore Brown, and though we don’t get to see much of him in the short film, the scenes that we do see are significant because Adrian talks to Theodore about how much he’s in love with Felicity because of how he talks about her to Theodore. I think at this point I could really appreciate the characters and the thought that went into their dialogue because Theodore tells stories about how he would want to know how it sounds when this girl “sings in the shower” or “how she looks before she brushes her hair in the morning”, I think it’s lines like that that can help any audience member buy into this relationship. Regardless, as the video goes on, we get to hear about their first date, before then leading to a montage of following dates/spending time together, by eating ice cream/kissing in a telephone box and taking photographs of each other. In this moment of the video you can’t help but appreciate the incredible attention to detail put into this short film to make it suit the time period, with the uses of Polaroid cameras, cassette tapes and telephone boxes.

In the final act of the film we cut back to 2019 and find out that Felicity may have actually had a child with Theodore (Ted), as Adrian reads a letter that she sent to Ted after finding out that it may belong to Ted. This is the big plot twists of the film, where the music really hits the audience hard, because we realise that their relationship wasn’t as happy and perfect as we believed it to be. However, even after this discovery she stays there to comfort him and apologise, and continues to be with him while he comes to terms with it, with the significant scene of Adrian standing in the shower fully clothed and drenched coming to mind as a significant scene. I think this shows that despite the mistakes she had made, she cares enough about the memories she has made with Adrian to want to stick by him. With the attention to detail on making this a period piece, with the choice of locations and props, the impactful music, at the moments where we need to believe in the relationship between Adrian and Felicity, and the well written dialogue, I can understand why this project was voted as the best at the showcase, and I can’t wait to see what else Megan Holly and Lisa Williamson produce in the future.

I think that judging by the incredible creativity that went into all of these concepts, and all the other projects at the showcase, I think it went incredibly well, and there are many creators in this group that have a promising future in film ahead of them.