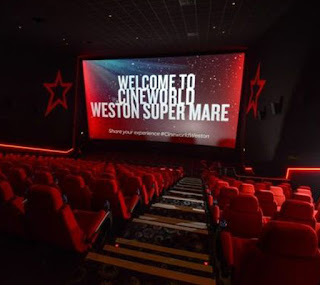 Kraig Taylor-Bryant has an eye on his future as he watched the short films in this year's University Centre of Weston Showcase, shown at Cineworld last Monday...

Since I’m going to be starting a film course at university in September, it was recommended to me by my peers that I attend the University Centre of Weston Showcase, to better understand the kind of film/media that’s in store for me when I start. The presentation showcased a range of media, including a couple of extremely interesting documentaries, some incredibly enjoyable short films, intriguing teasers, and even a music video.

The first piece of work that really caught my eye here was a short film called “First Dates”, directed by Daniel New. This was a fun little sketch that included people of polar opposites, meeting up, and attempting to connect with each other. One was a boy who was caught up in his own portable game device during the date, and relied on his own butler to speak for him when talking to the girl he is with. I think this bit somewhat intrigued me because I started to wonder if I would be like this on my first date! And that’s what I so enjoy about these festivals, the fact that some characters/stories can reflect your personality, whilst also hinting at an underlying message of sorts, such as how not to behave on your first date. In this instance, you may end up doing this without even seeing that what you’re doing is wrong until you see somebody else doing it. Anyway, another ‘first date’ that was featured in this video that was particularly interesting was a date between a ‘hipster’ type character, and a more ‘upper class’ personality, who seemed to see dating as more of a logical task, that requires constant monitoring and organisation (at least that’s how it came across to me). I think the message there though was that love is meant to be more spontaneous and unpredictable than that, and the major flaw that this story is telling us is that you can’t prejudge a person by their education, or how they look when you first meet someone. Of course there is a comical element to it, when you look at their personalities, considering how the upper class character treats this date as a “interview for a job” essentially, which again, I think serves as an interesting example of how dating should be seen as somewhat of a casual thing, and like less of a professional meeting to stress about but perhaps this is merely the rambles of an over-analyst.

I was also intrigued by ‘A Tale of Travellers’, which was Directed by Ellie Morgan. This is a documentary that looks into the treatment of hippies during the days of Margret Thatcher, and about how the police treated such people at the time. The really great thing about this one is that they managed to get someone who was actually in the thick of what was going on. They started by introducing us to Roger, a traveller who lives in his own caravan, and who used to transport other travellers to and from different camps, such as one that the travellers set up outside of Stonehenge. The documentary continually cuts back to him and uses his voice overs to tell this (very real) story, which seems very appropriate considering how much he was clearly involved in the instances where the travellers were abused and even beaten. What’s clever about this documentary’s story is that it shows the other side of what was going on, the side that we don’t often see when it comes to stories such as this, and how the government treats certain groups, like this one. Even better than this is that Ellie gave the perspective of a traveller that did abide by the instructions of the police. This clearly gives a new perspective to help portray the travellers as victims even further and provide a bit of sympathy for people that go through this, especially those that travel because of the fact that they can’t afford their own house. So overall, I think this one was definitely well thought out, because it had an intriguing premise, with a clear message behind it, allowing you to put yourself in someone else’s shoes, and was made with the noble intention of spreading awareness.

One of the other pieces that drew my attention was a short film made by Clay Sandford, titled ‘In Your Shadow’. This short film is about a photographer who seems obsessed with a certain girl and makes a work of art that is based around her, who either went missing/died. The photographer seems so obsessed that he keeps multiple pictures of her around his “dark room” and appears to continually hallucinate about her. This is one of a few projects during this showcase that seemed to give us a look into the mind of a person of mental illness, this one specifically about obsession with one person in particular, and how it eventually led the main character to do something to her (either kill her, or keep her somewhere, this is not entirely clear). What I really like about this one is that, at the end, the person whom he mistreated comes to visit him, and ends up strangling him with his own belt, almost seeming provoking yet again when she takes off his belt. What I absolutely loved about this moment in the film was how it could lead to either the interpretation that the girl has somehow broke free of his captivity, or that she is a hallucination, and he may even be strangling himself, delving into the depths of this man’s insanity. I personally think that she would be a hallucination, judging by the fact that she clearly didn’t actually want to be approached by this man, or didn’t approve of whatever this man intended to do to her, so I think that she kills him a little too sexually to actually be real. I would probably label this project as my favourite one to have seen at the showcase. 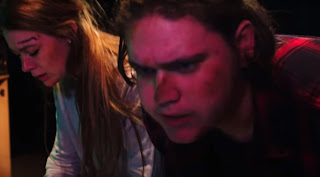 Another exciting story that I have to give credit to is “Concrete Ride”, which is directed by Daniel New (who also directed First Dates). This story seems to be based in a post-apocalyptic future, in which the main protagonists, Chloe and Ashley, must do what they can to survive, facing a couple of surprises across this eventful short film. The film eventually leads to a dark turn of events, in which Ashley decides he must sacrifice himself, to save Chloe, and he ends up sealing off one of the areas of the base, in which someone must be present to do so, to keep the radiation away from Chloe, so that she may stay alive. This short film is perfect example of a story that needs little budget and few locations to tell an exciting story. What do I mean by this? Well the story is only told from one room, and it’s the characters that keep us invested and intrigued as to whether they will survive. The approach that the director took for this project was a bold one, but definitely paid off, because I certainly felt attached to these characters and interested enough to continue watching, and this is the kind of director that I think the industry needs.

The final project that was shown during the showcase, was a short film called “Among Us.” This was directed by Grace Fox, and I have to say, this has definitely another project to watch out for at film festivals. This, like the last one, is a character story, told from very few locations, possibly one or two, and tells the story of a father who lives with a wife that he believes is not as mentally ill as his daughter claims that she is. From the start of the story the daughter seems to believe in her father, that he is doing what is right (as any father should) for his family, though when an incident that causes the protagonist’s daughter to get hurt by her own mum, she leaves the house, in fear for her own safety. This is an incredible story because it gives the perspective of a father that is so in love his wife that he doesn’t want to see the truth of how mentally ill she is, because he doesn’t want to face the possibility of losing the woman he fell in love with forever. The film does an astounding job of also promoting female equality through the strong female character that is the daughter of the family. Out of all the characters, she is the most sensible one, and of course, only really acts on her belief that her mother is dangerous, when she is hurt by her. I think that shows that the daughter isn’t the kind of character that will continue relying on her dad to save her, and even at the end of the story when she goes back to the house, I believe she did it purely out of the fiction that the mother was clever enough to create, when she called her daughter, making her believe that she wasn’t actually crazy. Overall though this film definitely made me think more on mental illness and how crafty those that could have lost their minds can really be. So this is another project that has a message, and one that I think is to not let your love for someone get in the way of protecting others that you love, to not let it blind you to the truth.

There were many more projects that were displayed at this showcase that were also enjoyable, but I only have space to pick out a select few to write about unfortunately. However, after attending this showcase of wonderful short films, I feel inspired for what I could create under the incredible support/lectures they must have had, to create such great work. These films were made with an obvious amount of dedication and care for their story as well as making them either enjoyable or interesting to their audience; the acting, the storytelling and the plot twists and structure, all were clearly well thought out. In projects like “In your Shadow” and “Among Us”, the directors, Grace Fox and Clay Sanford, clearly put a lot of care and time into ensuring that their actors understand the emotion that they wish to evoke from their audience. The plot twists and turns that both of these stories have are why I think both Grace Fox and Clay Sanford are definitely Directors to watch out for in the future, and I can only hope to tell the kinds of intriguing and wonderful stories that they can tell, when I start on my course later this year.