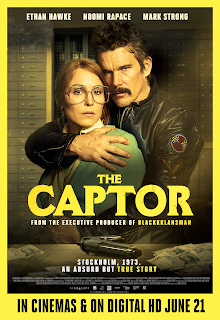 Steve Taylor-Bryant delves into the origins of Stockholm Syndrome with The Captor, starring Ethan Hawke...

Stockholm Syndrome is one of those terms that has settled within modern vocabulary and one doesn’t really question it. We know vaguely what it means and that seems enough for us but the first surprise I got when I started getting excited for The Captor was how relatively modern the term actually is, in comparison with some words in the English language which are thousands of years old; despite what my children might tell you 1973 is not actually that long ago. I was excited because I love to watch Ethan Hawke in things, I am a fan of Mark Strong, and both Noomi Rapace and Christopher Heyerdahl instantly make a project better by their involvement. I also love a bank heist film and learning that The Captor (a.k.a Stockholm in some territories) would educate me on the term Stockholm Syndrome’s origins meant I was going into writer/director Robert Budreau’s film with high expectations.

I watched the film once, couldn’t believe what I had seen was true at all, read the New Yorker article ‘The Bank Drama’ by Daniel Lang that the screenplay is based upon, and researched the real-life event. Then I watched the film a second time safe in the knowledge that the filmmakers had made an accurate retelling of events with only the characters names changed, I’m guessing for privacy reasons, but with all the details of the original incident online I’m not sure why that would matter. I had to do that research after the first screening not because the film is bad in anyway, it is in fact one of the better films I have seen in recent years, but it is so absurd, so darkly funny, so ridiculous in plot execution that I couldn’t tell if it was a parody at first glance. It wasn’t, these events actually happened like they appear onscreen and, once you have that knowledge, you can enjoy some excellent entertainment whilst laughing at how bizarre the world can be sometimes.

In 1973 Kaj Hansson, also known as Lars Nystrom (Ethan Hawke) walks into Stockholm’s biggest bank and after selecting some hostages demands that the Chief of Police, Mattsson (Christopher Heyerdahl) brings to him a prisoner by the name of Gunnar Sorensson (Mark Strong). The Chief reluctantly agrees and delivers Gunnar to the bank, using him as a mediator to secure the safe release of the hostages, Bianca Lind (Noomi Rapace), Klara Dardh (Bea Santos), and later as he was hiding in a supply closet at the beginning Olof Palme (Shanti Roney). Gunnar has been offered a deal that will lead to his freedom if he can save the hostages and get Lars to give himself up. Lars and Gunnar are old friends and start to plot their escape using the hostages but are met with hardship at every turn with a reluctant police force and a Prime Minister that only cares about the political fallout of negotiating with essentially terrorists. It is also the first time ever that a hostage situation has been broadcast live on Swedish television, so everybody is worried how they look. The events inside the bank twist and turn and I don’t want to ruin anybody’s enjoyment, so I am not going to go into great detail, but this film does demand you watch it.

Hawke is at his brilliant best. For the first eleven minutes, whilst you aren’t sure of his long term goals, he comes across as the Inspector Clouseau of bank robbers, he is nervous, doesn’t seem interested in money, and is wearing full biker leathers, cowboy hat and long dark wig that is so visually funny you will laugh out loud. As the film develops and you have Strong’s devious Gunnar in the mix along with a headstrong Heyerdahl as the Captain the various relationships and chemistries change onscreen. Whilst there is most certainly a dark comedic element to all proceedings, especially from Hawke, Rapace is the straight man type that grounds the story in relative believability and allows you to remember that this is in fact a serious true story being told that just happened to have an absurd feel to it and I am not sure I have ever seen Rapace be better on screen, I must have done because she is fantastic, but her portrayal of Lind in this movie is a performance that will stay with me for a long time.

Budreau has written a sharp, entertaining, and humorous take on a serious situation and then directed a stellar ensemble in an intriguing way, allowing for the comedy but also never letting you forget that this really happened. The inclusion of Bob Dylan songs throughout and a sort of period glaze to the visuals from cinematographer Brendan Steacy really put you in that 1970’s zone and despite what I can only imagine was a relatively small budget the film has the air of a stronger financially produced studio movie.

The Captor is glorious. It takes reality and shows you how absurd things can be, it shows you human fallibility, it shows you what happens under extreme pressure, and it allows you to marvel in the ridiculousness of those events in Stockholm in 1973.