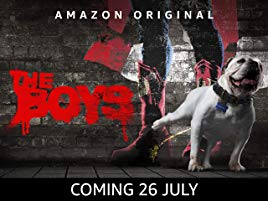 With seriously NSFW language (and added Spice Girls?!) watch the trailer for The Boys, coming to Amazon Prime in July...

Supes have been committing atrocities, which keep getting swept under the rug because they are revered by the adoring public. Billy Butcher recruits The Boys who have all been wronged by The Seven, the world’s most notorious superheroes, to bring them down and stop the corruption. Based on the best-selling comics by Garth Ennis and Darick Robertson, The Boys is a revenge story where the nobodies take on the somebodies.

Developed by Eric Kripke, Evan Goldberg, and Seth Rogen, the show stars Karl Urban as Billy Butcher whose "boys" include Laz Alonso as Mother's Milk, Jack Quaid as "Wee" Hughie Campbell, Karen Fukuhara as Female and Tomer Kapon as Frenchie. They're going up against The Seven: with Antony Starr as The Homelander, Erin Moriarty as Annie January/Starlight, Dominique McElligott as Queen Maeve, Jessie Usher as A-Train, Chace Crawford as The Deep and Nathan Mitchell as Black Noir.

Prepare for it to hit your screens on 26th July.