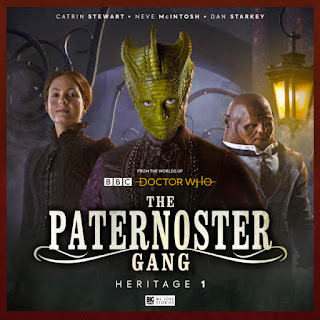 Tony Cross visits Paternoster Row in Victorian London as he listened to The Paternoster Gang: Heritage 1, out now from Big Finish...

This is the first Big Finish Boxed Set featuring The Paternoster Gang as a whole. So, we get Madame Vastra, Silurian Detective (Neve McIntosh); Strax, Sontaran Butler (Dan Starkey) and Jenny, Human Maid (Catrin Stewart). I won’t waste too much time outlining all the relationships as I’m assuming anyone reading this will be familiar with the Paternoster Gang from television. Suffice it to say Jenny is more than a Maid, Strax more than a Butler and Madame Vastra and Jenny more than just good friends.

The setting is Victorian London. They are a three-being investigation team who Scotland Yard seem to rely on when cases go beyond the confusing and into the downright strange. So, the Boxed Set is made up of three stories: The Cars That Ate London!, A Photograph to Remember and The Ghosts of Greenwich written by Jonathan Morris, Roy Gill and Paul Morris retrospectively.

The first, which I think is my favourite, features electric cars that shouldn’t exist. Cars that are more than just cars. How has this information come to Fabian Solak (Alan Cox*) come upon this knowledge and what is going on in his Millwall factory. He has a rather nasty assistant played by Julia Hills. Jonathan Morris is one of my favourite Big Finish writers and he does a fine job of creating the first adventure that may set the pattern for the rest of the series to come. He’s also very good at getting the balance between comedy and drama nicely balanced. The story has its fair share of period Cockneys. The main cast are excellent picking up from the television appearances, which are now some time ago. I adore Dan Starkey’s Strax even if it does make Sontarans difficult to bring back to television as out and out villains. Although as I cast my mind back, they’ve always been a little pompous.

A Photograph to Remember plays on the fashion for spiritualism there was in the Victorian period to weave an adventure out of people returning from the dead. There’s an added complication in that the beings responsible for this, which is more of an accident than deliberate villainy. This is the Bloomsbury Bunch. I won’t spoil this for everyone, but I did find the similarities to our heroes a little over-coincidental, but it was funny at points. It’s hard to say much more about this – including performances – without spoiling. It’s good fun though and the ending is nicely open so we can expect a return of the Bloomsbury Bunch at some point.

The final story, The Ghosts of Greenwich, finds the Gang investigating weird goings on in and around Greenwich. I have to say that, although I enjoyed this one, I could see the twist and ending coming a mile off. It’s still pretty good and the main cast get to stretch themselves a little bit. The guest cast is also excellent, and it is always good to hear the legend that is Trevor Cooper pop up in a Big Finish. It finishes with the Gang victorious but the sniff of something else out there.

This was an enjoyable first Boxed Set. Neve McIntosh, Dan Starkey and Catrin Stewart do a fantastic job with their characters across all three stories, although I think Starkey gets the most quotable lines. And it is nice to have a series that doesn’t take itself too seriously. It’s a light-hearted, old-fashioned – if Silurian-Human lesbian relationships can be called old-fashioned - adventure series, which is good enough for a simple minded man like me.

*Who played Young Watson in Young Sherlock Holmes (1985), which is a film I have fond memories of.

Or pre-order on Amazon when it is released on 31st August.