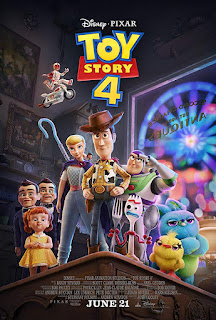 There is a saying along the lines of “just because you can, doesn’t mean you should” and this was very much uppermost in my mind on the way to see Toy Story 4 at Edinburgh Film Festival. Pixar had a winning franchise on its hands but the law of diminishing returns had to kick in at some point, didn’t it? The original Toy Story is an acknowledged classic, clever, funny and really well executed with a starry cast that just clicked. Toy Story 2 had all that plus new toys, new bad guys, a slicker action plot and a more emotionally connected story along with the comedy. Even Toy Story 3 had its moments, I mean… Spanish Buzz Lightyear, what’s not to like? And I will admit to shedding a metaphorical tear or two at the end of that film when *spoiler* grown-up Andy gives his toys away to Bonnie, a little girl who met Woody at a day-care centre – I won’t spoil the rest of Toy Story 3 if you haven’t seen it. But that moment at the end of 3, where Andy walks away from his box of toys really felt like a natural place to end the franchise. Buzz and Woody and his pals were all ready to start a new life with Bonnie and we weren’t going to be a part of it. So, when I started seeing rumours of a fourth film, my inner “cynical cash in” voice started muttering. To be honest, the trailers didn’t really do anything to alleviate the mutterings, with new “toy” Forky appearing to take a bit of a McGuffin role as an excuse to rehash the old lost-toy-rescue plotline. However, benefit of the doubt and all that so, only just managing to resist buying a balloon alien at the cinema (the claw is my master, I have been chosen, oooooh), I took my seat, scarily high up in the gods of the Festival Theatre because it was a sell-out, and told my inner voice to shut up.

What a wonderful film! Apart from Buzz and Woody, all the old favourites from the other films were there, although they weren’t quite as involved in the plot as in previous films: Jessie and Bullet, Slinky, the Potato Heads (thanks to archive material for the voice of the sadly departed Don Rickles), Rex and Hamm, even RC the car who is the subject of a dramatic rescue attempt in a flashback at the start of the film that sets up the storyline for Bo and the sheep to be lost toys later on. Of the new characters, Forky wasn’t nearly as annoying as I thought he would be and the scenes when we meet him, where he keeps jumping into the bin (he thinks he’s trash and not a toy) and Woody has to keep fishing him out are laugh out loud funny. I also adored Bunny and Ducky, their plans for how to rescue Forky (yes, he was the main focus of a lost toy rescue story but it worked really well as a plotline) were outlandish and hilarious and you really, really need to see their end credits scene.

But the absolute film stealer for me was Keanu Reeves (Keanu Reeves is in it!!) as Duke Kaboom, Canada’s answer to Evel Knievel – a poseable stunt bike rider, complete with motorbike and launch ramp. The poseable bit is important because the scene where we meet him in the club and he’s showing off was one of the funniest in the film for me. Keanu wasn’t the only new big name in the film as there were cameos from the likes of Betty White, Timothy Dalton, Carol Burnett, Mel Brooks, Patricia Arquette and many others, even Apollo Creed himself, Carl Weathers.

The only thing that wasn’t absolutely brilliant about the story, for me, was that their big bad this time wasn’t as evil as she could have been. Don't get me wrong, Christina Hendricks was excellent as talking doll Gabby Gabby but I ended up empathising with her character rather than pantomime booing her, because I could understand her motives for doing what she did and the end of her story was… no I’ll let you find that out for yourselves. What I will say though, was that her henchmen did freak me out a LOT but I’m not a fan of ventriloquist dummies at all.

But all in all, it was really good fun, heart-warming, funny, sad and nostalgic where it needed to be and the ending to the film gave me a sense of closure that I didn’t realise I wanted. So, dear Pixar, yes you could, and yes you did and yes, yes you should have. Just maybe leave it be now though and don’t do a fifth one? We’re happy now.