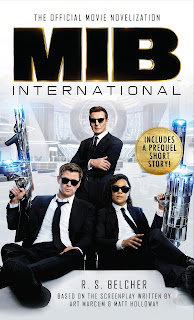 Suit up as Titan Books have announced the publication of the official novelization of the fourth Men in Black movie...

Directed by F. Gary Gray and set within the universe of the previous three Men in Black films, MIB: International features a star-studded cast – including Chris Hemsworth, Tessa Thompson, Emma Thompson, Liam Neeson, and Kumail Nanjiani – and is set to take the box office by storm this summer.

The official novelization is based on the movie screenplay written by Art Marcum & Matt Holloway, and includes a short story prequel to the events of the film, focusing on Chris Hemsworth’s character, Agent H.

The Global Men In Black Agency is in the midst of an existential crisis. A mole in the agency’s ranks is helping an aggressive race of aliens known as the Hive put the universe in danger.

The mission will send agents across the globe, from London, to Morocco, to the Eiffel Tower.

It will take two agents, with the ability to see the truth where others do not, to defeat the Hive, uncover the mole, and save the universe.

R. S. Belcher is an award-winning newspaper and magazine editor and reporter. Rod has been a private investigator, DJ, and comic book store owner and has degrees in criminal law, psychology and justice and risk administration, from Virginia Commonwealth University. His many acclaimed novels include The Six-Gun Tarot, Shotgun Arcana (a Kirkus Reviews Top Pick), Nightwise, and Brotherhood of the Wheel (Locus Awards finalist).