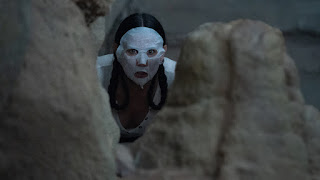 Managing to dodge the team building exercises by sneaking off to the cinema, Ren Zelen watched Corporate Animals at Sundance London recently...

An eerily realistic commercial opens Patrick Brice’s satire Corporate Animals – we see a gentle, Earth-Mother female, extolling the environmental virtues of her edible cutlery products and her commitment to creating stimulating and fair conditions for a diverse workforce of women, LGBTQ individuals and people of colour. She expresses her benevolent concern and her hopes for contributing to a better world.

In the next moment that image is entirely shattered. In Lucy Vanderton, Demi Moore gives us a villain we love to hate – the ruthless, scheming, egotistical, megalomaniac CEO of ‘Incredible Edibles’, a corporation which sells a range of edible cutlery.

She spouts motivational jargon, inspirational buzzwords, mottos of positive thinking and clichés of business-speak, while all the time working to pit her employees against each other, shift blame and extol her own virtues as an entrepreneur and leader. She hasn’t a single redeeming feature - whatever might be the most self-serving thing to do, you can bet Lucy Vanderton will do it.

Lucy’s latest scheme includes taking an unwitting group of her employees on a corporate team building exercise in the deserts of New Mexico. Leading the workers on the retreat is a blasé guide who goes by the name of Brandon (Ed Helms).

Characteristically ignoring Brandon’s advice to allow her team to take the beginner’s trail, Lucy demands that her non-experienced group take an advanced trail which includes spelunking through an underground cave system.

When out of Lucy's earshot, the co-workers share workplace gossip. There are rumours that the company may be insolvent and there are misgivings about the legitimacy of Lucy’s dealings and the authenticity of her ‘integrity’ and motivation. Lucy’s personal protégés, Jess (Jessica Williams) and Freddie (Karan Soni) soon discover that she has been playing them off each other by dangling the carrot of the same promotion in front of them simultaneously.

After some unexpected abseiling and a panic inducing squeeze though a tight tunnel, everyone emerges into the Cathedral Cavern of the El Malpais National Monument. While they are admiring the cave’s rock formations a minor earthquake causes a rock fall and the entire group finds themselves trapped underground. When that disaster strikes, it turns out that not even Brandon, their ineffectual guide, can save them, although, as it turns out, he does have his uses.

The mismatched and resentful group must pull together in order to survive. As the hours tick away and days pass, hard truths are uncovered, long-festering resentments and secrets are revealed, betrayals and manipulations are exposed, and unusual alliances are made. Meanwhile, the food supplies, consisting of one pack of the edible cutlery, can’t last long. 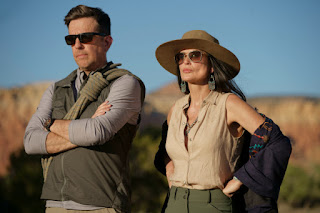 Corporate Animals turns out to be a pitch-black satire on the ‘dog-eat-dog’ (although we may need to rephrase that) world of corporate exploitation, hypocritical advertising and the selfishness of contemporary capitalism.

When this band of disgruntled and desperate humans find themselves trapped in an enclosed space without food and water, what unfolds is ghoulish examination of human social interaction and the erosion of boundaries and scruples.

Director Patrick Brice has made previous films in which characters find themselves in predicaments which force them to face up to outlandish urges and confess disturbing secrets (Creep and Creep 2). Corporate Animals remains in the same vein.

He has also assembled a cast heavy on improv comedians - Karan Soni, Martha Kelly, Dan Bakkedahl, Jennifer Kim, Nasim Pedrad, Isiah Whitlock Jr. Calum Worthy, Frank Bond, Wendy Meredith are part of the ill-fated group. They manage to fill out their individual characters while Brice creatively weaves each of them into the larger theme as their humanity gives way to their baser natures.

Writer Sam Bain, a co-creator of the British cult comedy shows Peep Show and Four Lions, peppers the film with acerbic banter and wicked quips which, thanks to Chris Donlon’s comic editing, come along at a ripping pace. Isiah Whitlock Jr.’s character Derek asserts, “If you swap the letters around in the word ‘team,’ it spells ‘meat.’ It may also be the first film to use “Weinstein” as a verb, as in Freddie’s discovery that, “your boss has been Weinsteining you.”

The film includes a couple of absurd, semi-animated flights of fancy. First when the hapless intern Aiden, played by Calum Worthy, becomes delirious as a festering leg injury turns gangrenous and his infected wound begins to sing a Britney Spears song, then later when Karan Soni’s Freddie consumes something he shouldn’t and falls prey to a surreal hallucination, fuelled by his cannibalistic guilt.

As well as spoofing survival movies, Corporate Animals offers some pointed and pertinent satire, lampooning the way that some of the largest corporations have erected public facades, pushing a plethora of insincere progressive, environmentally conscious messages while continuing with business as usual. Demi Moore clearly enjoys embodying this notion in the monstrous character of Lucy Vanderton.

Other standout performances include the disgruntled and increasingly volatile Billy, played by Dan Bakkedahl, the resigned and deadpan Gloria played by Martha Kelly and Calum Worthy as poor Aidan, the eager, put-upon intern who can’t help apologising for everything, while he enduringly maintains lantern light for the group using a lamp powered manually by an embarrassingly suggestive repetitive physical action.

The denouement of Corporate Animals finally addresses the question we’ve been dying to ask: 'What might happen when downtrodden people stop competing against each other and unite against their oppressors?' The answer turns out to be pretty cathartic and, in the spirit of the rest of the film, I can say that the talented cast make a jolly good meal of it.