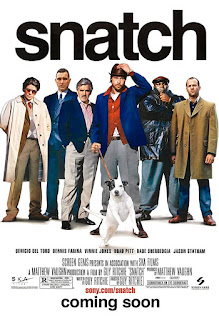 Steve Taylor-Bryant went back to his roots and watched Snatch...

Turkish and his close friend/accomplice Tommy get pulled into the world of match fixing by the notorious Brick Top. Things get complicated when the boxer they had lined up gets badly beaten by Mickey, a 'pikey' ( slang for an Irish Gypsy), who comes into the equation after Turkish, an unlicensed boxing promoter wants to buy a caravan off the Irish Gypsies. They then try to convince Mickey not only to fight for them, but to lose for them too. Whilst all this is going on, a huge diamond heist takes place, and a fistful of motley characters enter the story, including 'Cousin Avi', 'Boris The Blade', 'Franky Four Fingers' and 'Bullet Tooth Tony'. Things go from bad to worse as it all becomes about the money, the guns, and the damned dog.

I can’t believe this film is about two decades old, I still remember going to see it for the first time and I never remember anything! Whilst Guy Ritchie’s debut feature Lock, Stock, and Two Smoking Barrels was possibly the better and slightly more cohesive story, it is Snatch I return to for my Richie fix time and again because the film is just so damn quotable.

Snatch is filmed with excellent uses of slow-mo and various strange camera angles just like its predecessor, Lock Stock, and like all those pre-Warner Bros Ritchie films, the soundtrack alone is worth your time. If you take out Brick Top's clunky mobile phone the film is pretty timeless. None of the vehicles used are particularly flashy, new, or memorable and, as with Lock Stock Ritchie’s Mock-ney London underbelly of grit of violence, could be anywhere at any time. The entire look and sound of Snatch is a glorious assault on the senses and what Richie used to do very well.

“You should never underestimate the predictability of stupidity.”

Story wise there are multiple threads using many different characters but all seem to get a fair crack of screen time and the casting is perfect. I like Jason Statham a lot, he makes harmless entertainment, a poor mans Dwayne Johnson if you like, but his performances in those early Guy Richie films will always stand out for me, especially here where shoulders much more responsibility than he maybe had previously. Alongside his wannabe gangster Turkish is sidekick Tommy, the butt of the jokes, and Stephen Graham is brilliant in the role, the comic timing of the two as a double act is spot on. Alan Ford as Brick Top is frightening enough and what anyone wants their London Kray-esque hardmen to be like, and with Benicio Del Toro, Frank from Eastenders, Dennis Farina, and the sublime Rada Serbedzija there is a lot top performers all shining. It’s Robbie Gee as Vinny and Lennie James as Sol, along with Ade as Tyron that are in the flat out funniest moments though. The two stand out performers in a film full of greats are Irish bareknuckle Pikey Mickey played flawlessly by Brad Pitt, and Bullet Tooth Tony portrayed by a very good indeed Vinnie Jones. You have to remember when Snatch came out Pitt was Hollywood royalty, the best of the best and possibly the highest paid star of his era, and Jones was a retired footballer. Pitt has fun though, in his Mickey this is that Hollywood legend letting loose in a role that I doubt anyone thought he’d ever accept. Jones on the other hand is playing to type but I’ll admit he does that type better than nearly anyone else. I watched a lot of Vinnie Jones as a footballer, not gifted but grafted and left everything on the pitch, and most of his 100 odd screen appearances are the same. It’s those early Richie films, along with The Midnight Meat Train and Mean Machine, that I adore Jones for though. He made a career playing Vinnie Jones and found a hole in the market nobody knew was there and you have to admire him for that.

Snatch is a great example of a filmmaker left to play in his sandbox with no interference, a great example of what can achieved when cast and director are fully in sync, and a very funny, entertaining British gangster film. Endlessly quotable, hilarious, and proper.

“Brick Top: Listen, you fucking fringe, if I throw a dog a bone, I don't want to know if it tastes good or not. You stop me again whilst I'm walking, and I'll cut your fucking Jacobs off.”

Synopsis and all quotes from IMDb