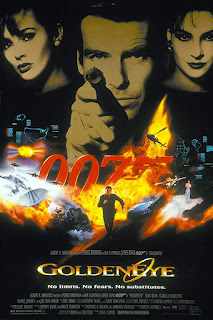 One of film's taglines says "When the world is the target and the threat is real, you can still depend on one man." For us, that man is Kraig Taylor-Bryant as he looks back at GoldenEye (with major spoilers)...

Being a kid of the 2000s, I never got to appreciate a lot of classic movies growing up. Mainly because I wasn’t exposed to them for the first 10 years of my life, meaning I didn’t get to see Star Wars until such an age, but also meaning I didn’t see E.T, or Jaws. By the time I discovered the James Bond franchise, it was during the era of Skyfall, and I only really backtracked as far as Casino Royale from there, never really aware of the previous Bond actors, until my Dad pointed them out to me. Only now, when studying film in college/university, does it truly pique my curiosity as to how the franchise used to be, which encouraged me to pick up GoldenEye.

The plot revolves around a Colonel, Ourumov (played by Gottfried John), for the most part, and his plot to hijack a nuclear space weapon, codenamed GoldenEye, with the help of the crazed Xenia Onatopp (Famke Janssen). To track these two down, James Bond (Pierce Brosnan) requires the help of one of the few survivors of Ourumov’s warpath, a hacker by the name of Natalya Simonova (Izabella Scorupco), to help him stop their evil plans to destroy Great Britain and send it ‘back to the stone age’. Towards the end of the film, like many older films, this one has an interesting plot twist. Fellow MI6 agent, Alec Trevelyan (Sean Bean), is revealed to be a Russian from birth. Still reeling from the loss of his parents by the hands of the British when he was young, he unveils that he is the one behind the entire plan to hijack project GoldenEye. I think its revelations like these that make these Bond films more enjoyable than the modern day films, because it’s the characters in movies like these that make them so intriguing that you can’t stop watching.

When talking about intriguing characters in GoldenEye, its difficult not to mention, the insane (and somewhat sexualised) Xenia Onatopp, played by the talented Famke Janssen, known for her best supporting actress nomination for X-men The Last Stand. Janssen portrays a character that seems truly insane, having a desire for sexual pleasure before killing her victims. This character seemed to be one of the most intriguing because she seems to have little interest in James Bond romantically, but still seems to want to kill him like she has many of her other victims, sexually. This character definitely had a Harley Quinn vibe about her, mixing loyalty to a lead antagonist (in this case, Alec Trevelyan), and her insane desire to kill. I personally would have loved to find out more to the backstory of this character. Whenever she was on screen, I knew something dangerous was in her mind, and honestly wish knew more about her motives, or how she became such a psychopath.

Of course, while I’m talking about antagonists, I should probably mention the intriguing Alec Trevelyan. This is a man who is constantly grieving for his parents throughout this film, a guy who can’t seem to let go of his past, and that leads him to not realise that he may care about characters such as 007, over the time he’s spent with them. Speaking of which, the director of this film, Martin Campbell, seems to do a great job of establishing a relationship between James Bond and Trevelyan, before unveiling him to be a traitor. Although I can’t help but feel as if it would have been a lot nicer to find out more about this character before revealing his betrayal, perhaps if the betrayal was more along the lines of handing inside information to someone like Colonel Ourumov, I think that would help to branch out future stories involving an organisation working within MI6. 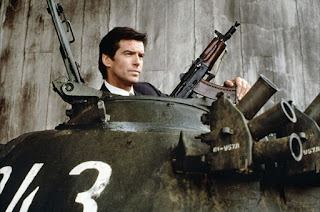 In terms of the action in the film though, GoldenEye certainly doesn’t disappoint. When I started the film, I had no idea that I would get to watch a sequence involving James Bond driving a tank through a Russian city. This chase made it clear that this James Bond didn’t seem to care as much about collateral damage as other MI6 agents. I think that’s what’s interesting about this take on the James Bond character, that he seems to have a little more of a grey area when it comes stopping the bad guy. That’s not to say that this James Bond is a bad hero at all, in fact I think he’s the right kind of hero that is needed when there is threat involving nuclear weapons in a Bond movie. Throughout the film he’s flirting with many female characters, making his recklessness and youth clear to us as viewers, whilst delivering memorable lines that define him. A good example of this is when he’s dangling Alec Trevelyan over an edge of a satellite platform, threatening to potentially drop him, and Trevelyan remarks “For England, James?” with the simple response of “No, for me”, right before dropping Trevelyan intentionally. I think that moment clearly defines him as a character that really does see himself as above the law, and separates him from other Bonds (such as Daniel Craig's). I think a good example of a time when another Bond has brought someone in, before they escape anyway, is Skyfall, and I think the moment when Pearce Brosnan’s Bond drops Trevelyan, he’s showing his old partner that Trevelyan didn’t really know Bond at all, much like James never really knew Trevelyan.

Regarding most of the female characters in the film, it certainly seems like they are somewhat treated like objects, more than characters in this film, with the exception of the new MI6 boss, M (Dame Judi Dench). Of course later films will reveal to us why she is such a strong character, who isn’t the kind of person to take no for an answer, and who will not take recklessness lightly, but just getting a taste for how she will keep Bond in line in future movies is a pleasant sight. Having only seen this character in movies such as Skyfall and Casino Royale, it’s a pleasant surprise to see her appear in earlier films in the franchise. However, back to other female characters in the film, it somewhat bothered me how many flirty remarks James Bond makes in this film, with women being okay with it in some cases, when he flirts with other women, around them. Nevertheless it’s good to see ‘what was’, when it came to film industry at the time, and that the film industry is changing, to bring us stronger female characters on the big screen, even in big franchises such as Fast and Furious, with one of the characters to feature in the ‘Hobbs and Shaw’ film, that’s coming August this year.

Despite the fact that the action in this film is fun and enjoyable, there are moments in the film that build a tension which seems to be killed off when it becomes clear that James Bond is going to get out of the situation because the solution to the problem is very conveniently displayed in front of him. The moment where this is really obvious is when Bond and his Russian Hacker companion are stuck in a helicopter together, with missiles directly targeting them. This seems like a tense moment until we find that there is an eject button placed clearly next to him, within such a reach that he would have to continuously try to headbutt the button to save them.

I found the plot of this film to be full of thrills and excitement, with a few clichés here and there, and a few clear remarks of sexism, which doesn’t seem to be as prominent in current Bond films, though I hope there’s further improvement on that in the future. I think that seeing this new take on 007 was intriguing, and I am certainly interested in seeing more Bond films in this era, because the ‘grey area’ of this James Bond is what interests me the most, the fact that his selfishness is a little more obvious, and I want to see more moments such as the one when he purposely drops his old partner!