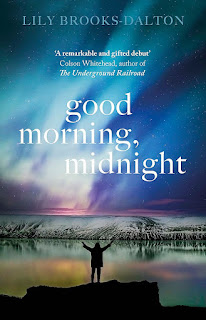 Netflix has announced that George Clooney is in pre-production on a so-far untitled feature project that he will direct and star in...

The book's synopsis says: "Augustine, a brilliant, ageing scientist, is consumed by the stars. He has spent his entire life searching for the origins of time itself. He has now been left alone on a remote research base in the Arctic circle, all communication with the outside world broken down. But then he discovers a mysterious child, Iris, who must have hidden herself away when the last of his colleagues departed.

"Sully is a divorced mother. She is also an astronaut, currently aboard The Aether on a return flight from Jupiter. This is the culmination of her career, the very reason for all the sacrifices she has made - the daughter she left behind, the marriage she couldn't save. But then something goes wrong with the ship's communication system.

"Marooned in the vast silence of space and the achingly beautiful sweep of the Arctic, both Augustine and Sully must find a way to make peace with the choices they have made and find a path to redemption."

Brooks-Dalton’s novel was met with critical acclaim and was named one of the best books of the year by Shelf Awareness and the Chicago Review of Books. The film will begin production in October.

“Grant and I couldn’t be more excited to be involved with this incredible project,” said George Clooney. “Mark is a writer we’ve long admired and his script is haunting. We’re thrilled to be working with our friends at Netflix as well.”

“Having known and worked with George for over two decades, I can’t think of anyone better to bring this amazing story to life,” said Scott Stuber, head of Netflix’s film division. “The book is powerful and moving, and Mark’s adaptation is beautifully written. At its core, this is a story about human nature, and one that I know our global audiences will fall in love with, just like I did when I read it.”