Film - The Emperor of Paris 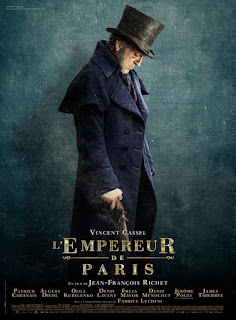 Susan Omand read subtitles at 9 in the morning as she watched The Emperor of Paris at Edinburgh International Film Festival...

I seem to be making a habit of finding films starring Freya Mavor for my random Festival picks, what with last year’s potluck being Dead in a Week or Your Money Back and then choosing this one, The Emperor of Paris for no reason other than I liked the title. I promise you it’s not deliberate but maybe it’s because she herself chooses fascinating projects to work on.

Because The Emperor of Paris is a truly fascinating tale. It’s based on the real life of Eugène François Vidocq who, in early 19th century Paris, turned from criminal to informer,  to crime-fighter and finally to Chief of Security himself. In this French film adaptation written by Éric Besnard, under the reign of Napoleon, François Vidocq (Vincent Cassel), the only man to have escaped from the country's biggest prisons, is a legend of the Parisian underworld. Left for dead after his last spectacular escape, having been thrown overboard from a French prison ship with another prisoner while chained and shackled, the ex-convict tries to be forgotten in the guise of a simple trader. His past catches up with him, however, and, after being accused of a murder he did not commit, he offers a deal to the chief of security: he and his own small gang would use his knowledge of the people and the gangs in Paris, to help the police to fight the underworld, in exchange for his freedom. However, this bid for freedom ends up costing him a lot more than his criminal knowledge.

I cannot verify how close the film’s plot is to the actual history of the man’s life but, my goodness, it makes a good story. It did take me a little while to get into, which I put down more to having to read subtitles so early in the morning (it was a press screening I went to) rather than the lack of action in the film, because it is shockingly violent, vicious and bloody from the start as the scene in the prison ship is set. Vincent Cassel is immediately captivating as Vidocq, his physical and intellectual stature making a commanding presence on the screen that immediately draws the eye and this is backed up by incredible acting talent and a wonderful emotional range. Freya Mavor plays Annette, a pickpocket streetwalker with whom Vidocq falls in love and, if I hadn’t known she was a Scottish actress, I wouldn’t have known, if you know what I mean. She is French to the core as Annette and plays the role brilliantly, never overstepping into parody. Other notable performances include James Thierrée as Le Duc, an army man who joins forces with Vidocq in order to reclaim his land from the government, and William Sciortino as the police officer Bagnard who starts off pursuing Vidocq and ends up fighting at his side. But, second only to Cassel as Vidocq, the absolute stand-out for me was August Diehl, whose portrayal of Nathanaël, the prisoner with whom Vidocq escapes at the start of the film, is psychopathically brilliant and, given his already impressive back catalogue, he is on the verge of breaking into the big leagues.

It’s not quite the perfect film though. If you wanted an all-out action film, there are (just a couple of) places where the pace dropped but, if you instead wanted a historical drama, there was slightly too much “action”, including a stupid looking three barrelled pistol in one of the end battles that caused the audience to laugh and broke the tension. My only other complaint is that some of the outdoor locations, like the market, looked and felt too much like sets. It was all a bit too clean for 19th century France and seemed deliberately ordered in its disarray. But both those things are minor quibbles and are more than made up for with the beautiful lighting and cinematography, with some utterly enthralling camera angles in places, and the gloriously French darkness of the story itself. There are no happy endings.

Think Gangs of New York but set in Napoleonic France and you have the gist of The Emperor of Paris. Brutal, bleak and bloody brilliant.