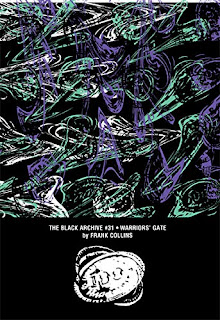 Steve Taylor-Bryant slips through the Warriors’ Gate as he reviews an essay on its inception and journey to the screen as part of Doctor Who’s 18th season, thanks to The Black Archive #31 written by Frank Collins and published by Obverse Books...

I like Frank Collins a lot. He is a smart and articulate man, he is great company if you ever get the chance to meet him, and his vast back catalogue of reviews shows a man that has the rare skill to see far below the surface of something and find something tangible and important that nobody else spots. So when I found out he was writing a book on his specialist subject, Doctor Who, and breaking down just the one story, I will admit I was a wee bit giddy with excitement. And with just cause because Frank’s issue of The Black Archive, number 31, on Tom Baker’s episode Warriors’ Gate, is as good as the story itself.

When you start doing a behind the scenes book, you have to tread a fine line between vital information you have found and what a general reader will want to know. Not every fan of Doctor Who is ready for a PhD dissertation in camera angles, and not every Doctor Who fan just wants gossip on what John Nathan-Turner was up to in 1980. To write a book that pleases the entire spectrum of Doctor Who fans I don’t believe is possible but, with his essay on Warriors’ Gate, Frank Collins gets as close as I think anyone will. It’s a masterclass in where research can lead you and from the writing history of Stephen Gallagher to his initial script for Warriors’ Gate, through JNT’s and Christopher Bidmead’s ideas for the particular season the story would land in, to hiring of Paul Joyce and all the film elements he brought to his television direction, there is a lot for the fans of technical elements of television to get their teeth into. But Frank goes deeper, and through interviews with writer and director you get entire chapters on the inspirations behind the ideas in the script and the visual elements that made the screen. French new wave cinema, science fiction radio plays, German art from hundreds of years ago, the inspirations that both Joyce and Gallagher brought to Warriors’ Gate are what makes this particular story stand out from others of that era as different, as daring, as inspired.

Learning everything that Frank discovers and lays out for your pleasure is an eye opener and re-watching the episodes with the new knowledge taught to me in the book was an experience to say the least. I've always liked Warriors’ Gate, although I came to it on VHS tape in the late 1980s as I was only 5 when it was first shown on TV, but knowing everything that went into its production somehow elevated my viewing and the story with it.

I honestly didn’t think books on behind the scenes of one Doctor Who story would be for me. I was wrong and am now going to happily buy some more Black Archive titles on my favourite episodes, although Frank Collins has set the bar quite high for everybody else.