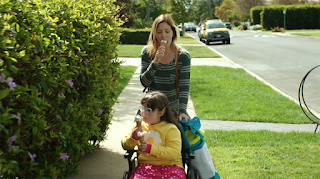 Single mother Lisa Wade (Stephanie Turner) must move in with her father-in-law after the death of her husband. Struggling to find work, Lisa takes a job caring for Justine (Daisy Prescott), a young but opinionated girl with spina bifida. An unlikely pair, they become friends and help each other in many ways, but their relationship is challenged when Justine’s well-to-do parents object to Justine playing with Lisa’s biracial children.

Stephanie Turner is one of those actresses that you know from things but can never remember where you saw her, one episode of Bones, one of Scorpion, that kind of thing, so I thought it would be interesting to see how her performances transferred to a feature length starrer. What I didn’t know at the time was that Turner also wrote and directed Justine, and I have to start this review by applauding her for producing a very good film.

Justine is more than just a film about a carer and her ward, it is a film about friendship, about class differences, about casual racism and the differing standards of parenting. There is a lot to take in but if you are willing the content is not as hard going as it could seem on the surface. The one great thing Turner and her team has done is bring a hand held "no sheen" aesthetic to the finished film so it plays out more as a documentary than a movie and that really helped me to take the roller coaster ride of emotions with Lisa and Justine, the argument about an hour and a quarter into the film in particular, and also the scene at the hospital towards the end.

Whilst Daisy Prescott, who plays Justine, deserves as many plaudits as she can get for her portrayal it is Stephanie Turner as Lisa and a great showing from Darby Stanchfield as Justine’s mother Alison that I enjoyed watching the most. The change in Lisa from desperate for work to actually caring for another person’s child is only manageable because Turner does such a great job and the changing relationship between her and Stanchfield as the film progresses is a remarkable one to watch. Backed up ably by performances from Glynn Turman as Papa Don and Josh Stamberg as Michael, Justine is a beautifully made story that you can’t help but be touched by.