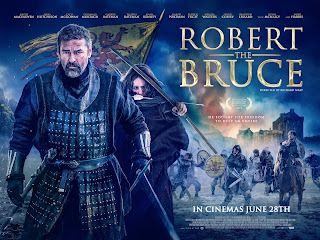 Our own braveheart, Susan Omand, watched Robert the Bruce at Edinburgh Film Festival...

I think it’s unfair to market this film as Braveheart II because, apart from the time period and the wonderful Angus Macfadyen reprising his role of the King, it’s its own beast and should be treated as such.

Let me explain. Braveheart was a historically inaccurate Hollywood blockbuster war film, directed by an A-lister, full of action and gore and story. There were tender moments, horrific scenes and rabble rousing speeches and, like any football game against the auld enemy, you picked your side and you cheered them on, coming out at the end of it with your dander up and your blood boiling at the injustice of it all, ready to battle anew. You can read my full review of that film from a few years back HERE but that’s the general gist.

This film is not that and, for me, since it is an independent film on a very low budget, it is the better for it. Instead of trying to replicate the epicness, in both tone and scale, of Braveheart, the Robert the Bruce film is much more introspective and intimate, focusing instead on a personal angle and concentrating on an individual event and the characters within that, rather than trying to provide an era-spanning account of the man’s life.

The story opens as, appropriately, a story being told by a mother, Morag McFie (Anna Hutchison), to her 10 year old son Scot (Gabriel Bateman), in the year before Bannockburn. She tells him of the battles that his late father fought in for Robert the Bruce and the murder in 1306 of “Red” John Comyn (Jared Harris), main rival to The Bruce in their fight for the Scottish Crown, a fight which had been raging between Scottish clans since 1286 after the death of King Alexander III left no heir. This murder left Robert the Bruce excommunicated, on the run and with a hefty bounty on his head as the fight for the crown continued, with Bruce’s self-proclaimed coronation not being recognised. Some Scotsmen were still loyal to Bruce but many of the Scottish borders noblemen aligned themselves and their clans with England and, first, Edward Longshanks then Edward II.

The McFies were one of these clans, ostensibly aligned to the English, but Morag, who had lost her husband and two of her brothers in border wars, has been left to look after her own son, Scott, and her brothers’ children, nephew Carney (Brandon Lessard), who is an apprentice blacksmith in the nearby village, and niece Iver (Talitha Eliana Bateman) on her own in an isolated croft.

Historically, of course, the whole individual family thing is made up but the fight for the crown was real, Comyn’s murder was real and the excommunication and bounty on The Bruce’s head was real. They even added in a nice little nod to the legend of Bruce and the spider. But this is not a bio-pic so I wouldn’t have expected pinpoint accuracy, the history is purely for context. The main story of the film is about the people, because it’s to the McFie’s croft and into this family’s lives that The Bruce eventually stumbles, almost dead after having been badly injured in a fight with some of his own men eager to claim the bounty after he tells them to disband and that he is no longer going to fight. And it is to this croft that the rumours of the king’s presence bring a gang of local men, keen to kill the king outright and claim the bounty, headed up by Morag’s brother-in-law, and the children’s uncle, Brandubh (Zach McGowan).

The drama and heart of the family dynamic works very well because of the actors involved. Everyone was believable in their roles and special mention must go to Gabriel Bateman as Scot, who shone every time he was on screen with a range of emotions and a confidence that belied his young age. However I found the writing, at times, was a little clunky and you could tell, especially near the end, where the dialogue had to be reined in to avoid it straying too far into Braveheart pastiche but they managed not to overstep the mark too often and it definitely held the interest. Another thing that held the interest, for me, were the battle scenes which were very well choreographed and lifted the action of the film to another level with clever use of camera angles. Talking of camera angles, I can’t finish a review of this film without mentioning the glorious high and sweeping long pans over the Scottish mountains. You just can’t get better scenery than that and it was used to great effect throughout.

So, is Robert the Bruce a sequel to Braveheart? I don’t think so. Is it an engaging, well acted, beautifully shot independent film that, in itself, deserves your time and attention? Yes, absolutely.