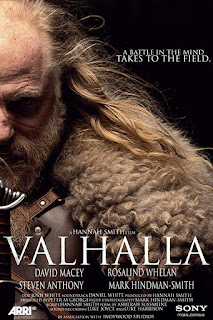 With the short film being released on 28th June, Steve Taylor-Bryant watched Valhalla by Hannah Smith...

I backed Valhalla when I saw my friend, Daniel White, share a funding campaign for a short film about mental health and… er… Vikings? It's not two things I would automatically put together and so I was intrigued.

Written and directed by Hannah Smith, Valhalla shows a man lost in his own mind, fighting his own battles like many of us do, dreaming of the day someone will come to save us from ourselves, at least that’s how I interpreted Valhalla. Showing a depressed man in his pyjamas is not a new way of instantly visualising depression or mental health issues but interspersing the modern visual with the same man in a Viking battle is a little bit genius if I’m honest and it works incredibly well and is visually powerful. Add a narrated poem written by Asherah Hüssmeine and the power elevates once again until you are sat watching something you genuinely feel you have lived through yourself. Daniel White’s evocative score adds yet more power but in a very understated way, you would miss it if it wasn’t there but are you aren’t really sure if you are listening to a film score or your own pulse sometimes and, between Hannah and Daniel, they have been very clever on that front.

In a film that has so much power, metaphor, music, imagery, content, it would be easy for any one element to take over the project to the detriment of all the others, but I have to commend Hannah Smith for getting the balance perfect. The film is a powerful representation of depression. It is beautiful to look at and Josh White is fast becoming a favourite cinematographer of mine, destined for great things. It is performed flawlessly and, at only just over five minutes in length, packs a punch.

There are bigger things to come from all involved I am sure and whatever the future holds I wish them all luck, but to have a short film this good on your C.V. will definitely help.