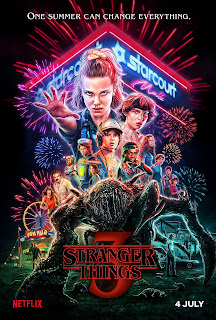 With Stranger Things 3 due to drop on Netflix on Independence Day (that's a week on Thursday if you're counting), here's a bit of a recap from the cast so that you can get up to speed...

First, there was Stranger Things: A love letter to the ’80s classics that captivated a generation, Stranger Things is set in 1983 Indiana, where a young boy vanishes into thin air. As friends, family and local police search for answers, they are drawn into an extraordinary mystery involving top-secret government experiments, terrifying supernatural forces and one very strange little girl.

Then came Stranger Things 2: It’s 1984 and the citizens of Hawkins, Indiana are still reeling from the horrors of the Demogorgon and the secrets of Hawkins Lab. Will Byers has been rescued from the Upside Down but a bigger, sinister entity still threatens those who survived.

Now, on 4th July, get ready for Stranger Things 3: It’s 1985 in Hawkins, Indiana, and summer's heating up. School’s out, there’s a brand new mall in town, and the Hawkins crew are on the cusp of adulthood. Romance blossoms and complicates the group’s dynamic, and they’ll have to figure out how to grow up without growing apart. Meanwhile, danger looms. When the town’s threatened by enemies old and new, Eleven and her friends are reminded that evil never ends; it evolves. Now they’ll have to band together to survive, and remember that friendship is always stronger than fear.

But here's a better recap from the cast of the show: Finn Wolfhard, Gaten Matarazzo, Noah Schnapp, Caleb McLaughlin and Sadie Sink tell you everything that happened on the show so far, in an epic (well, 15 minute) recap of seasons 1 and 2.