Watching the Detectives - How to Get Away With Murder 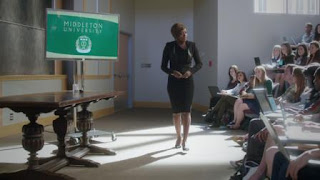 In a series of articles, Susan Omand and Steve Taylor-Bryant are going to remember the policemen, spies and criminal specialists that entertained them over the years. Today, Steve has discovered How to Get Away With Murder...

The first four seasons of How to Get Away With Murder are on Netflix in the UK at the moment and, with season 5 starting this past week on Sky Witness [it started on Wednesday 26th June on Sky Witness and is not due on Netflix UK until December - Ed], I’d thought I’d give the show a go. You see I avoided it for a long time, I’d had my fill of American procedural shows and anything I’d tried that was slightly different to a procedural turned out to be a glorified soap opera and that’s just wasted on me. I’d seen a trailer for HTGAWM and instantly jumped to the soap opera conclusion and didn’t bother but the more I saw Viola Davis in things, the more I warmed to the idea that HTGAWM might actually be good. And it is. It is very good. But it is an expensively produced soap opera, although I can forgive it because Davis' performance stops it drifting into a glossy gossipy drivel and keeps it as an entertaining, if far fetched, slice of drama. Oh who am I kidding? This is sexy addictive crack TV!

Annalise Keating (Viola Davis) is a hot shot defence attorney and college law professor who, every year, selects a handful of students to work at her small firm to gain experience. This year she picks good looking man about town Connor Walsh (Jack Falahee), ambitiously ruthless Michaela Pratt (Aja Naomi King), son of a respected judge Asher Millstone (Matt McGorry), and daughter of billionaire Mexican businessman Laurel Castillo (Karla Souza). A late addition to the class, pulled off the waiting list, is Wes Gibbins (Alfred Enoch) and Keating has her five joining her existing team of lawyer Bonnie Winterbottom (Liza Weil), fixer Frank Delfino (Charlie Weber), psychiatrist husband Sam Keating (Tom Verica) and, on occasion, policeman Nate Lahey (Billy Brown). Then a girl goes missing, a student at the university, and everyone’s world turns upside down. Murder, intrigue, sex, corruption, perjury, secrets and lies, guilt, violence, the first season is packed with all these things running as an overarching thread alongside the crime of the week stories that are served up as well. Then season two ups the ante, season three goes even further, and by the time you are stood in front of the US Supreme Court and including that other sexy TV show Scandal in the fourth season, I’ll be honest, I was hooked like a junkie needing another fix. Real life? That can wait I need my show fix. Work? What’s work when Annalise’s fate is hanging in the balance. Bills? I don’t have time to pay bills I need to know about the baby and how the District Attorney is involved in that thing with that person because of that other thing!

I’m really not the right person to tell you if this is actually any good or not because I’m seriously having a problem not watching it. It could be the worst thing ever written I wouldn’t know because it’s already in my veins keeping its grip on me. I’ve found myself really caring for The Keating Five even though, in the cold light of day, they are despicable people who want to be more despicable by becoming lawyers but god help anybody who harms a hair on their heads because I will come for you! Sorry, I’ve gotten a bit carried away.

Seriously, though, the term “addictive television” was invented for How to Get Away With Murder. Viola Davis performs Oscar worthy scene after Oscar worthy scene and the others have somehow got their claws into me too. Watch it and not feel the same I dare you.