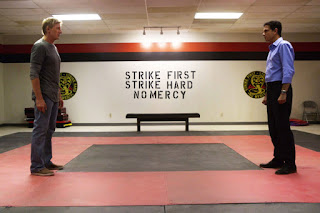 Our own deshi Kraig Taylor-Bryant waxes on and off about Cobra Kai on YouTube Premium...

I think the story of me discovering this intriguing spin off to the classic Karate Kid movie, would probably start with watching the Karate Kid movie itself. After seeing the original first movie I was intrigued by the ideals and nature of the Karate that is taught in it, as well as the prospect of the character, Mr Miyagi, a caretaker of the main character's house. It interested me how the most unsuspecting person taught a child who struggled with bullying just for trying to protect somebody else, however the situation with the characters seemed a little more complex when I got to watching Cobra Kai.

Not long after watching the first two movies, I found an interview with the karate kid himself  Daniel LaRusso (who of course isn’t a kid now) Ralph Macchio, in celebration of the 35th Anniversary of the Karate Kid film. What I didn’t expect during the interview was the mention of a spin off TV show, featuring not only the original Karate Kid, but also his opponent and school bully Johnny Lawrence (played by William Zabka). Fortunately, I managed to find it through YouTube’s Premium subscription service, and thought I’d give it a try.

One of the things that really stood out to me at the start of the show, was how the show seems to try and help you sympathise with the once young Johnny Lawrence, who, since his shameful defeat in the film, has led a fairly difficult life, and not just because of the karate tournament, but because of the difficult life he had at home during his childhood. The show details the difficulties he had with his parents, to give us a background behind why he treated others (including Daniel LaRusso) the way that he did. The show makes us realise that his sensei at the time was the only father figure that Johnny had to look up to, not only in his high school years but much earlier than that, and so much of his attitude could also come from the influence of his cruel karate teacher. I think this is a clear call-back to something that LaRusso’s teacher taught him in his days in the Karate kid films, “there is no such thing as a bad student, only a bad teacher”. I think the fact that this links back nicely to the films, helps to make this character’s motives a little clearer to us, with the help of his backstory.

So anyway, earlier on in the show Johnny Lawrence encounters one of his neighbours, Miguel Diaz, who’s being bullied outside of a shop, before Johnny decides to interfere, and help the kid. Eventually this leads Johnny to teach his own dojo, by reopening Cobra Kai, to teach Miguel how to defend himself. To begin with, Johnny Lawrence quite obviously is taking advantage of Miguel, to get him to do chores for him, but as they start to get into the lessons more and more, I think it becomes obvious that Johnny starts to treat Miguel as his second chance of being a father, and his personality develops as this goes on. And it’s not just Johnny Lawrence that is influenced by his students, but they are heavily encouraged by him to not be ashamed of who they are, to feel more confident in themselves, and I think that very cleverly reflects how Johnny himself was made to be more confident when he was a kid, and discovered Cobra Kai. 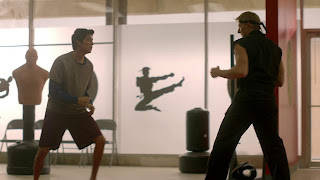 Alternatively, whilst some students were influenced by Johnny Lawrence to be more confident, and perhaps more violent, Johnny Lawrence’s birth son Robby, develops in quite the opposite way, though begins this journey to (ironically) spite his father. Following his life of crime, he chooses to start working in Daniel LaRusso’s car dealership to intentionally annoy his father, though from here, this leads him to become Danny’s student, after LaRusso starts to become anxious to take on a karate student of his own. I think by this point in the show, its easy to see Daniel LaRusso as the bad guy in this situation, because he’s training and mentoring Johnny’s child, which you could see as a good thing, as he could almost be being the parent that Johnny never was, but you could also see how this would damage Johnny himself, feeling not only like his choice of adult profession is being mocked as more of a hobby, but also the fact that Danny is stopping Johnny from reconnecting with his kid to attempt to redeem himself, as he continually tries to do during the duration of the first season. Regardless it’s interesting to see the parallel between these characters, as Johnny makes his students more confident, and Danny tries to make his student a better person.

One of the things I really appreciate about this show, is that throughout it, it feels like everyone is a victim of the rivalry between Danny LaRusso and Johnny Lawrence. Even Danny makes a victim of Johnny’s son Robby, because without Johnny being in the way, you could argue that Johnny may be able to connect with his son better. I also think that if Johnny hadn’t felt taunted by Danny LaRusso’s billboards and advertisements of his successful business, then Johnny wouldn’t feel as if he needed to get back at Danny. It also goes the other way, obviously, with everything that Johnny’s dojo does to his own students, almost turning them into bullies at one point, and the student that suffers the most because of it all, without really realising, is Miguel Diaz, who loses his girlfriend due to his untempered emotions, that led him to hurt her because of how he was taught by Johnny.

Its kind of interesting how that moment of the show seems reminiscent of the moment in Karate Kid, where Johnny and Daniel first met, on a beach, and got into a fight over a girl, and the girl ends up getting hurt, which is exactly what happens here, so it gives an interesting sense of history repeating itself.

The thing that I love most about this show, is because every character shows themselves to have a good heart deep down which makes it hard to not root for any of them. I think that’s what makes the final fight of the first season so much more tense than the film, because we understand the motives and where each character began, before they got to this point. I myself felt both happy and disappointed with the end fight’s result, because there were other characters that I cared about, who didn’t win. I think that’s what anyone can appreciate about TV shows, the fact that it offers more runtime than a film, when you dedicate to whole season, it gives the audience more time to understand all of the characters better, and I wish that more shows would take from this when it comes to developing their villains more.

There are also many references in this show, to the Karate Kid film, to help create impact when it comes to reflecting on Johnny or Daniels childhood, and the films that we learned of their childhood from. Originally it had bothered me, how many times they look back on these moments in the films, though after speaking to my mother, it helped me realise, that this was done so that anyone could enjoy the show, without needing to watch the classic films if they don’t want to. I think the TV show does still do a great job of incentivising people to watch the films though, by creating a sense of curiosity and wonder as to how Johnny and Danny’s rivalry began. I think that’s why this show is worth giving a try, not only because of the times when it looks back on the memorable moments of the films, but also the characters that we won’t get to see in the show in person, and the locations and props that clearly took a lot of effort to find again.

Images - IMDb
You can watch Season 1 episode 1, episode 2 and Season 2, episode 1 for FREE on YouTube.