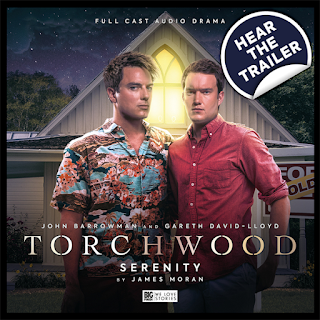 To commemorate the ten year anniversary of Ianto's on-screen death on 9th July 2009, John Barrowman and Gareth David-Lloyd have been reunited in the studio for Torchwood: Serenity, a new full-cast audio drama from Big Finish Productions and BBC Studios...

Yesterday marked ten years to the day since Ianto Jones, one of the most beloved LGBT characters ever in the science fiction genre, died in episode four of Russell T Davies’s Torchwood: Children of Earth. Fans were absolutely dismayed when the character was killed off as a result of gas poisoning by alien menace, the 456. The following public outcry sparked huge online campaigns, a charity fundraiser in his name (which raised more than £10,000 for Children In Need), and even a Ianto shrine in Cardiff’s Mermaid Quay.

Since then, Torchwood has been revived as an international co-production for television in Miracle Day (2011), and continues to thrive in multiple audio drama ranges courtesy of Big Finish. Originally scheduled for release on 25th July, this new very special Torchwood story has been made available EARLY as a surprise treat for fans of the show.

James Moran, who co-wrote the 2009 TV mini-series with Russell T Davies and Torchwood TV episode, Sleeper, has returned to pen this new story set before the events of Children of Earth. Ianto Jones and Captain Jack are reunited and, at first sight, it looks like they’ll live ‘happily ever after’...

Serenity Plaza is the most exclusive gated community in South Wales. You’d kill to live there.

Jack and Ianto have gone undercover as a happily married couple. There are rumours that something’s wrong at Serenity Plaza and they’re determined to investigate. But the problem is that Serenity Plaza is just so rigidly normal.

Suddenly, Jack and Ianto have to confront the problems that normal couples face. Sharing a house together, doing the washing up, entering the residents’ baking contest, and hoping to win the Best Kept Lawn. Competition is fierce. Because this is Serenity Plaza. And you’d kill to live there...

James shared his thoughts on this very special release: “Surprise! Beyoncé-style surprise album drop! Me and Beyoncé, so similar in so many ways... I’m really excited that you’re getting this early, I can’t wait to see what you make of it. It’s VERY weird, VERY silly, and I’m still not sure how I got away with it!

“I’ve adored jumping back into this universe – Torchiverse? Woodyverse? – and playing with its unique toybox. It’s a particular joy to release this on the tenth anniversary of Ianto’s on-screen death – how many other characters live on like this? Thank you for keeping him alive, and for always being there for absolute madness like Serenity. Now, keep off the grass, don’t use the blue towels, and DON’T mess with Ianto’s kebabs.”

Director Scott Handcock added: “When we first started doing new Torchwood stories, we knew Gareth and Ianto were loved, but had no idea to what extent. Gareth was initially nervous about reprising the role, but has embraced the audio medium, both as an actor and writer. That’s the joy of Big Finish. Without compromising the power of his on-screen death, Ianto’s living as full a life as ever, and it’s a joy to be a part of.”

Torchwood: Serenity was released at midday on Tuesday 9th July, priced at £7.99 on download or £9.99 on CD. Don't forget that all CD purchases unlock a download option via the Big Finish app and the Big Finish website.

Listeners can also buy and/or pre-order the Torchwood monthly range individually, or save money by buying a Torchwood bundle. A six-release bundle is £50 on CD or £45 on download. Or why not save even more money by ordering all twelve Torchwood adventures released monthly throughout 2019 and 2020 at £90 on CD or £84 on download.