Documentary - Short Round Up 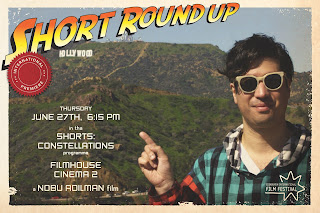 Hold on to your potatoes as Susan Omand gives us a short round up of Short Round Up, a short documentary on recently at Edinburgh International Film Festival...

This is the ultimate ‘what if’! In 1983, a Japanese/Canadian boy called Nobu Adilman auditioned to play the role of Indiana Jones’ intrepid sidekick Short Round in Indiana Jones and the Temple of Doom. Obviously, he failed to get it, because the role went to Jonathan Ke Quan who went on to make the part definitively his own (and I couldn’t imagine anybody else being quite so annoying in a very not annoying way). Now, 35 years later, Nobu is an artist and film maker and he has used the wonders of the interweb to search out other youngsters who tried out for the role too.

What a brilliant idea for a short [round? – Ed] documentary and what a fantastic front man for the task Adilman is, engaging and entertaining in his own right as well as being a very good interviewer. His own story of how his audition went comes out as he speaks to five other potential Short Rounds who auditioned for the role back in the day, whose jobs now range from actor to sales executive, advertising copywriter to arts administrator and… competitive skating instructor? Yes, apparently so. Adilman wanted to know how they felt at the time of the audition, what it meant to them then, what it still means now and would they go back and do it all again. The answers were many and varied. Some were convinced they had the role, others knew immediately that they didn’t, one even pretended to friends that they had to turn it down, just to be cool and get the girls. But all of them agreed on one thing – as, often, the only Asian kid in a school of thousands, it was great to find a place, even for a moment, in a room full of other kids just like them.

As well as speaking to the auditionees, Adilman goes on a quest of his own in the documentary, to try and track down Short Round himself. So he heads to California, where Ke Quan is apparently a stunt choreographer, and he also takes the opportunity while there to go on that mining train rollercoaster ride at the theme park “just to see if he could have done it for real in the film”. Ke Quan and his people are being elusive, however, not returning calls or answering emails and letters, however Adilman does get a real coup as part of the documentary, speaking to Mike Fenton, the casting director from the film whose job it was to actually find Short Round in the first place, travelling all over North America (complete with redline aeroplane flying in straight lines over a map!) conducting thousands of auditions. One of the questions Adilman asked was what could he have done differently at the audition he went to and the answer is a simple one – nothing. Mike Fenton said that there was just “something” about Ke Quan, in his look, his attitude, his accent (yes it was real and not put on for the role) that made him perfect for it, nobody else came close. What did Ke Quan say to this? Sadly, nothing, as, at the time of filming, he still hadn’t returned any of Adilman’s calls.

However, there was one thing that was said in the documentary that really struck me, more than the great initial idea, more than the fascinating interviews and the sharp and clever execution, and it is this: In 1983, Short Round was one of the few Asian roles on screen who was not “played for laughs” as a racially stereotyped parody. As one of the wannabe Short Rounds said in the documentary, “Before, there was no one to look up to.” And it’s true when you think about it – apart from Sulu in Star Trek who, let’s be honest did get quite typecast really, everyone I could think of was a joke character, made fun of because of how they looked or acted, or as a pantomime style bad guy to be booed and beaten. That stereotypical world is now being changed, very, very slowly, but it is changing and it needs to, so that kids today can also find their own “someone to look up to” on screen, someone that they can identify with and build their own dreams around, someone to make them feel represented.

If you have a spare 17 minutes, here’s the documentary in full, courtesy of CBC Short Docs.