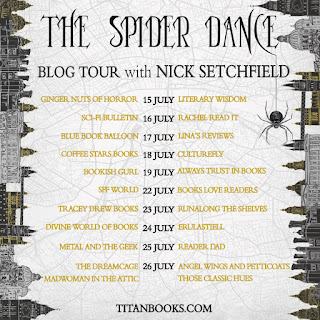 We're honoured to be part of the final day of Titan Books' tour with Nick Setchfield's latest novel, The Spider Dance. In an exclusive article for us, the author spins a web of eight legged nightmares. Arachnophobes may want to look away now...

Read Tony's review of the book itself HERE.

I had the worst nightmare of my life when I was six, maybe seven years old.

In my bedroom there was a pyjama case, hooked upon the back of the door. It was baggy and shapeless, just waiting to be transformed by the dark. That night I dreamt it was a jaguar. A jaguar pyjama case that became the real thing, leaping on to the bed and tearing at my face with its claws, its hot, sleek bulk pinning my body.

Then the jaguar slumped, all of its power and frenzy gone. It was a pyjama case again. Soft, comforting. But somehow it still felt alive. There was movement beneath the fabric. An impatient movement, like muscles coiling and shifting and pushing against the skin that contained them.

The case had a zip on its side. Stupidly curious, I pulled it. And out tumbled the spiders. So many spiders. Those quick, countless legs covered my face. I could sense them spilling onto the sheets, filling the room. My world was drowned by spiders. Naturally I woke up screaming.

As nightmares went, this was a pretty persuasive reason to never sleep again.

I was going through a spate of bad dreams at the time – a sensitive, imaginative kid, gorging on the fantastical and paying the price by night - but this was the blockbuster that persuaded my dad I needed a little help. He took me to see “the dream doctor” – only years later did I twig that this was a splendid euphemism for child psychologist. The dream doctor told me to draw my dreams, so I set them down on paper: the sentient lava that hunted me across an endless volcanic landscape; the alligator that stole through the corridors of my school; and the spiders, of course, skittering now in felt-tip across a sheet of A4.

Without quite realising it I was taming the nightmares.

The therapy worked. No more bad dreams. Spiders continued to carry an echo of that night for me, though, and I never felt remotely comfortable sharing a room with one (I once flung a mug over an especially sizeable intruder and didn’t dare lift it for a fortnight). I still remember the heart-stopping sight of a house spider hovering in mid-air. Only when I caught a glint of a web-strand in the gloom did I realise flying spiders weren’t a thing now. Thank you, nature, for that, at least.

I wasn’t an arachnophobe, not quite. But these creatures were certainly streaked with the residue of nightmare fuel.

And yet I was drawn to them, too, thrilled by them, in fact. I loved any movie with a giant spider, from The Thief of Baghdad to Tarzan’s Desert Mystery to – the clue’s in the title - The Giant Spider Invasion. The sight of Jon Pertwee’s Doctor Who facing the towering Great One, goddess of the Eight Legs, in Planet of the Spiders gave me delicious shudders. I enjoyed shuddering at standard-sized arachnids too - the tarantula that crawled across Sean Connery in Dr No, the scuttling temple guardians brushed aside by Harrison Ford in Raiders of the Lost Ark. They were my favourite monster but the screen contained them, made them safe. It was a protective sheet of glass, like the one that’s painfully visible between Connery’s shoulder and that prowling tarantula.

My attitude to spiders changed in my early twenties. The conversion happened on a Swiss mountain. Our guide stopped and pointed out a spider on the path. It was a curious one, with what appeared to be a miniature golf-ball balanced on its back. “Regard!” said the guide, flicking the tiny white sphere, which went tumbling. The spider spun like a compass, clearly distressed. Then it spotted the sphere, hurried towards it and placed it back upon its spinneret before disappearing into the grass. The golfball was an egg sac, woven from silk. It contained the mother spider’s young.

I watched Arachnophobia shortly after. The scene where they torch the egg sacs of the queen spider didn’t feel like a fist-pumping moment of victory. It felt wrong. It felt cruel.

Now there’s a spider on the cover of my latest book, and another on the spine, hanging from the last letter of the title. I have a private army of spiders on the shelves of the world’s bookshops. If that isn’t taming a nightmare I don’t know what is.


Find out more about Nick Setchfield on his website: nicksetchfield.com

The Spider Dance by Nick Setchfield is now available to buy