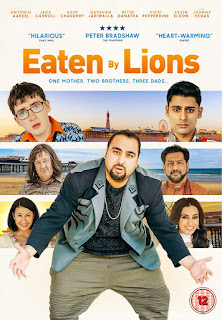 Two Brothers, Three Dads, one article (with some spoilers) from Kraig Taylor-Bryant as he watched Eaten By Lions...

Eaten By Lions is a heart-warming tale about two brothers by the names of Omar and Pete, now connected only by their Gran and the neglect/loss of their parents, and how they go on a journey to Blackpool to scatter their grandmother’s ashes following her death, and to look for Omar’s real Dad. Along the way they encounter many issues, some being incredibly unexpected, and some that are utterly ridiculous to keep the audience laughing whilst also feeling sorry for the characters (almost like the comedic style of the Inbetweeners franchise).

The acting in this film, by both Antonio Aakeel (Omar) and Jack Carroll (Pete), is extraordinary, with Carroll bringing some of his comedic personality that some may remember from his rise to fame in Britain’s Got Talent in 2013, which he incorporates into the attention-seeking troublemaker that he plays as Pete. It’s interesting to see how, on this adventure that Pete goes on for his half-brother Omar, he ends up in comedic situations that are entirely unexpected, and its almost concerning and hilarious at the same time, when we witness him get into trouble without meaning to.

I think the central focus of this story though, is the character of Omar, since they’re both going on this journey to look for Omar’s dad, and whilst this journey does incorporate their Gran’s ashes into the tale, it’s more about Omar discovering who his dad is, and trying to reconnect with him. Aakeel does an astonishing job of portraying the sad child, who not only has to cope with the loss of his mum and Gran, but now must look out for his brother, whilst feeling neglected by their foster parents (of sorts). The story arc of Omar is honestly the best out of all the characters in this film, because he is the embodiment of the theme of family. Omar goes from having virtually no family, to having a bigger family than most people usually have. Omar’s caring for others is recognised by the character of Amy, who he meets by buying her an ice cream, and from here, it’s a roller coaster of people being kind to him and letting him down, before he ends up with everything he deserves. 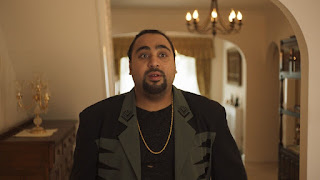 The supporting cast for this film do a great job of keeping this film entertaining, with Kevin Eldon (known for his role in Hot Fuzz) and Johnny Vegas (known for his role in shows such as Benidorm) being the most notable and enjoyable supporting characters, with Vegas’ unusual but hilarious behaviour in his portrayal of “Ray”, and Eldon’s portrayal of the quiet but funny “Ken”. I think most notably though, Asim Chaudry did an incredible job of portraying his flawed, but fun, dad character, who doesn’t know how to be a dad. His journey of discovering how to be a friend, as well as father to his son, is simply heart-warming, and seeing him use his immaturity to entertain his son, is just brilliant.

The story seems to have an interesting flow to it. During my first watch, I struggled to appreciate the slower moments of the film, though when you realise where the film is going, and how things are going to play out later on, you have to appreciate the calmer moments, when the characters interact. I think this film does what a lot more mainstream films need to do nowadays, and that is focus on the characters more than anything else, because when the film reaches its emotional climax, it really hits you with this film, because you understand every character, but you still want to know more of the reasoning behind their actions.

I think the journey of the film as a whole is pretty reminiscent of the struggles of life, and how sometimes the weird and the unexpected can happen when you least expect it. In this film, the main characters are constantly encountering obstacles, with nothing going according to plan for them, or anyone around them, from the first act, where we realise the main characters’ parents were “eaten by lions”, to the moments when the Omar and Pete try to scatter their Grans ashes, with even this getting interrupted before they can say a few words about her. Characters such as Omar’s dad, encounter the unexpected too, with the simple realisation that he has a son being the prime example, and I think all the moments when things like this happen, more than a few people can relate to it, because unexpected things happen to people all the time in real life. Whilst this film may present the unexpected in the most ridiculous, yet brilliant way, it still symbolises how we often don’t have control over how our plans end up, because even Omar and Pete have to overcome many obstacles to have the family that they’ve been looking for, throughout the film. 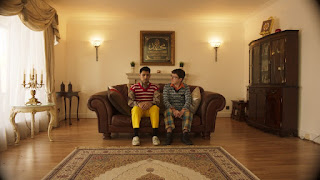 One of things that I think the film does really well to keep its audience engaged, is balancing the multi stranded story between both Omar and Pete, where one brother is bonding with his dad, and the other finds himself in a weird relationship with the supposedly “mute” Parveen (played by Natalie Davies). This decision for the film does an interesting job of showing us how the characters of Omar and his dad bond throughout the story, whilst keeping us both confused an entertained by the relationship between Parveen and Pete. The two stories (though this may be unintentional), do a careful job of separating Pete and Omar, to a point where there would be tension between them, to make the climax more impactful, because we see Omar’s newfound family fall apart all at once, losing his brother on top of this. I think this is was a great moment that would help Omar to realise that he can’t sacrifice his current family (his brother Pete), for this new family, because his current family already put his new family on the line, for Omar. And I think this realisation helps him to realise that family is about not leaving anyone behind and remembering who’s always been there for you.

The racial representation in this film is also done fantastic justice, because of the bond between Pete and Omar that we see in the first half of the film, which shows us that being a family isn’t all about blood or race, it’s about who’s always there for you and who you stick your neck out for, even when they drive you mad, like Pete seems to do to Omar (with his addiction to stealing/shop lifting). The thing that really completes this theme, is how the film ends with everyone dancing together, showing how Omar’s newly found family has embraced Pete as their own, and thinking back to how Ken and Ellen treat Pete in comparison to Omar, it’s obvious that Omar’s family is the embodiment of what everyone’s family should be about.

I think overall, anyone could get a good laugh out of this film, and if the emotional moments don’t hit you, the impact of the ridiculous and unexpected will. With the performance of the whole cast being on point, and the plot being relatable to anyone, I would recommend that everyone give this film a go, on its digital release on the 22nd of July, and its DVD release on the 29th of July, which are both available to pre order.