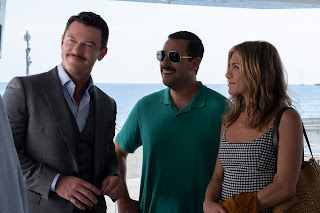 Whodunnit? Kraig Taylor-Bryant did as he writes about the Netflix Original film Murder Mystery...

Now, I’m not entirely familiar with the whole “murder mystery” genre, when it comes to books or films; I think the closest I ever got to watching something like that, was that one Doctor Who episode, where David Tennant’s Doctor meets Agatha Christie. What I am a fan of though, is the works of Adam Sandler and Jennifer Aniston. I’ve seen Adam Sandler more than once in comedy movies, such as Happy Gilmore, but I know of his performance in romantic ones like The Wedding Singer, so I thought it may be interesting to see how he brings both comedy and romantic together in this film. With Jennifer Aniston, I also wanted to see how she would bring both styles of work together, that she has previously been known to perform as separate genres in some cases, with well-known sitcoms like Friends, and romantic/emotional stories like Marley and Me. Though I’ve never actually witnessed how they both work together in a film project, hence the reason I wanted to give Murder Mystery (a Netflix Original), a try.

This film is about a middle-aged couple, retired NYC cop Nick Spitz and his wife Audrey (Adam Sandler and Jennifer Aniston), who decide, at long last, to go on their honeymoon to Europe. Though on their journey over there, they meet a man by the name of Charles Cavendish (Luke Evans), a man with vast wealth and a desire to ruin his Uncle’s family gathering/cruise by getting drunk and, after talking with Audrey, decide to invite herself and Nick along, to also help disrupt the event. During the party it is revealed that Cavendish’s fiancé is not only Charles’ ex, but also that Charles’ uncle, Malcolm Quince (Terence Stamp), decides to cut off his other family members from his vast wealth, deciding instead to give it all to his partner, Suzi Nakamura (Shioli Kutsuna). Over the cruise, we’re introduced to all the other the characters who are related/close to Malcolm in some way. Grace Ballard (Gemma Arterton), Tobey Quince (David Walliams), Colonel Ulenga (John Kani), Maharajah (Adeel Akhtar), Sergei (Ólafur Darri Ólafsson) and Juan Carlos Rivera (Luis Gerardo Méndez). During the night of Malcolm’s announcement to give all of his wealth to his new partner, before he signs a contract, he is mysteriously murdered, as the lights are turned off, and his body is found with a knife plunged in his heart.

From here, many other characters are killed one by one, and both Nick and Audrey find themselves in the thick of each murder, leading Inspector De La Croix (Dany Boon) of the French police, to believe that they are the killers. 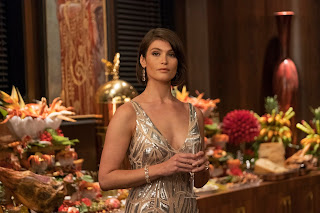 It’s truly interesting to see how we learn about each character, and how many of the people in this family, have done bad things, or all seem like relatively bad people. As the film goes on, we start to notice that because of the way some characters behave, or what some say, that they may be the killer. We start to learn that the famous Grace Ballard seems mysterious in her attempts to point fingers at others without a second thought, or that Suzi is extremely uncooperative with Nick and Audrey, as they attempt to get to the bottom of this.

The film also does an excellent job to throw in some secrets that Nick is keeping from Audrey to keep things interesting, such as the fact that Nick never really passed his detective exam, and he was never actually going to take Audrey on the honeymoon to Europe until she got angry at him about it. In this moment, the film really proves itself worthy of merit, because both characters have a good reason to behave this way, and in some ways, Nick’s secrets are a way of showing us as an audience how he feels about Audrey, because of the fact that he wants her to be happy, and proud of him for being a detective. At the same time though, we can understand why Audrey isn’t happy when it comes to this revelation, and eventually proves to Nick that she’s more than just a hairdresser, as he claims during their argument.

That’s another thing that the film does a great job of, and that’s promoting a clever female lead role with Audrey. The fact that it is she who understands how murder can be complicated, because Nick clearly doesn’t get many murder cases as the Sergeant that he is revealed to be, she seems to be the ones to know more about the complexities of it than him. I also quite liked how every quality she has includes a good reason as to how she developed this personality trait, such as how she does understand key motives behind murder from the books she reads, or how she can get people talking about their lives from how she talks with people as a hairdresser. I also like the fact how there are circumstances where she has to encourage her husband to be interested in solving the case, as there are moments when he’s feeling too lazy or hungry, so I think it’s a nice change of pace to see the woman in a couple take charge in films nowadays.

One of the things that the writing throws in, to really surprise us, is when Audrey and Nick are called to Sergei’s hotel room, to discuss how Malcolm had stolen the Colonel’s fiancée too, before she died in childbirth. We then learn that following this, he had a conversation with Sergei about how Sergei might go about killing Malcolm, if he were to do it. Interestingly the method that Sergei describes that he told the Colonel, was similar to the tactic that was used to kill Malcolm. 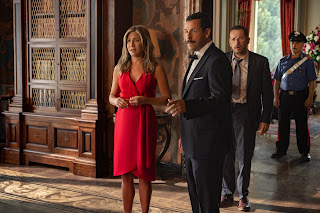 Interestingly enough the speculation doesn’t stop there, with moments of uncertainty continually popping up from here, with the fact that the Colonel seems to be busy doing something else, when Audrey and Nick and trying to outrun the killer. And Charles offers Audrey transport to somewhere safe, that leads her to get shot at in a library. Eventually the two of them do discover the real killer, by themselves at the last minute, which leads to a thrilling action sequence towards the end of the film. In this moment, we do get to hear a bit of AC/DC playing in the background, which I think is just of one of the things that makes this movie good for any couple to watch this film, because it has a lot of things that an older couple might enjoy. I think the whole fact that Audrey and Nick seem like relatable personalities for a couple as well, with Audrey’s keen interest in reading, and for her husband to make an effort to show her how he feels about her, and also how Nick always seems to be looking for food, or a place to sleep.

I think that when it comes down to how Jennifer Aniston played this role, I think she certainly gave off the right enthusiasm that the character she plays clearly needed to have, because oddly enough, her character is excited by the whole murder mystery, as she almost sees it as one of the books she reads, come to life. I also think that she is great when she’s put into a situation where she can play a strong character, because when Audrey is put into a tense situation, she will react, and may even surprise herself with what she can do when she puts her mind to it, and I think Jennifer Aniston was able to do a terrific job of showing that, and making her character believable.

Adam Sandler also surprisingly gave off an impressive performance, showing himself to be more than just a comedic/romantic actor, but could also play the flawed, lazy, middle-aged American, that he needed to, for this role. I think perhaps his character may have been a little easier to play though, as I think Audrey was a stronger personality in the story anyway, but their chemistry when it came to the comedy was great. When they were on screen together it felt as if they were actually an old married couple, and the arguments between them felt believable because of it.

Regardless, when they finally catch this killer, the film reaches a fun conclusion. Murder Mystery in general has a nice way of mixing the serious moments with implied humour or a little more direct humour. Like in some moments the characters might say ridiculous things when their lives are on the line, which is obviously to get a laugh out of us, as viewers, but there are times when the character’s situation in general may be laughable, which I think helps to make this film even more entertaining. I definitely think that this film is worth giving a go if you have Netflix because it’s a ton of fun to watch, and if the great music and crazy situations aren’t enough to intrigue you, the characters will be.