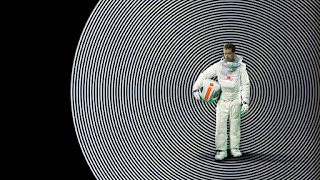 Steve Taylor-Bryant decides to celebrate fifty years since the moon landing by celebrating ten years since Duncan Jones Moon was released. Contains spoilers if you somehow haven't seen it...


There was a time when energy was a dirty word. When turning on your light was a hard choice. Cities in brown-out. Food shortages, cars burning fuel to run. But that was the past. Where are we now? How do we make the world so much better? Make deserts bloom? Right now, we are the largest producer of fusion energy in the world. The energy of the sun trapped in rock, harvested by machine from the far side of the moon. Today we deliver enough clean-burning helium-3 to supply the energy needs of nearly 70% of the planet. Who'd have thought? All the energy we ever needed right above our heads. The power of the moon. The power of our future.

Sam Bell (Sam Rockwell) is an employee of Lunar Industries and for three years is contracted and based on the dark side of the moon. Lunar Industries are mining Helium-3, the power of the Suns radiation trapped in Moon rock, which he sends back to Earth to fuel 70% of the planet with this clean and renewable energy. Due to some satellite issues communication with home is not on a live feed but recorded and sent later leaving Sam isolated and alone. With such little human contact and all of it indirect, he feels that three years is far too long to be so isolated and he is beginning to hallucinate as the end of his three years approaches. All he can think about is his wife, Tess (Dominique McElligott), and his daughter, Eve, still an infant having been born just after he left Earth for his assignment on the Moon. With two weeks to go, he gets into an accident at one of the mechanical harvesters and is rendered unconscious. Injured, he awakens back at the station in the infirmary, assisted by his robot support GERTY (voiced by Kevin Spacey). GERTY tells him that a rescue team named Eliza will come to the Moon but as Sam recuperates, he decides to take another look at the accident site and discovers something that will change everything. To go on would involve massive spoilers and I will already not be able to contain myself and plant loads I am sure so here is a still from the movie and if you are still reading afterwards then on your own head be it… 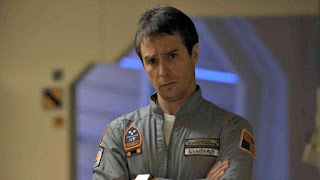 Still here? Then you cannot blame me in anyway if this article ruins your enjoyment of this wonderful film. Also, if you don’t know the twists and spoilers already, why not? How have you gone ten years without watching Moon? Whilst you look at the brief synopsis above and it reads like a science fiction film, Moon is far more than that, mainly because I think the label ‘science fiction’ has been tainted over the years. You say Sci-Fi to somebody now and they list you a lot of CGI heavy action films that have explosions and little consequence, just in space. Don’t get me wrong, I love a Star Wars, or a Guardians of the Galaxy, but rarely do we get given films in the mould of 2001: A Space Odyssey or Silent Running, or Outland, in fact when you look at the list of “Science Fiction” films released in 2009 good story films are few and far between, whilst mindless popcorn movies used an awful lot of cinemas budget. In ’09 we had Avatar, G.I. Joe: Rise of Cobra. Gamer, Star Trek, Terminator Salvation, Transformers: Revenge of the Fallen, and Watchmen with a combined budget of 1.14 billion dollars, all watchable in their own way but hardly what you could call character pieces, or even decent stories, let alone the science fiction I grew up with.

The three films in ’09 that blew me away, that tried something different within the genre, that paid homage to what had come before whilst staying wholly original were Moon with its 5 Million Dollar budget, The Time Traveller’s Wife budgeted at 39 Million Dollars, and the very good District ( made for 30 Million, three fantastic slices of cinema produced for a combined total of 74 Million Dollars, or less than half of Transformers. Why studios would risk the multibillion-dollar budgets on stuff that will eventually leave audiences wondering where the good stories are, year after year, is beyond me. Moon is a throwback to some of the best films ever produced whilst feeling relevant, fresh, intriguing, and human, and was made for a studio executives sandwich bill. Anyway, I’m ranting and shouldn’t be, I guess my point is that at a relatively cheap price we can get excellent actual science fiction films made but for some reason we aren’t.

As I’ve mentioned above Moon is many things way beyond just a space-based movie. It is a study in the human condition, love and loss, loneliness, mental and physical health, longing for something that just seems constantly out of reach and whilst all these elements in Duncan Jones original story, and Nathan Parker’s screenplay really are quite intriguing and fresh ways to tell a tale they are wholly dependant on a stellar performer to make them work. Enter Sam Rockwell. I’d hazard a guess that Rockwell is singularly responsible for carrying about 95% of Moon on his shoulders. From setting up the story for the audience in the beginning, to showing us a mental and physical decline in a way that grips us as viewers, to playing against himself once the secret of the clones is out, to conversing with a robot that had no voice until the end of the production, Rockwell gives a career best performance, and that is the highest compliment I give a man whose career is littered with some of the best performances ever shown on screen. The way Rockwell narrates what’s going on through his actions, just giving the audience enough to grasp an understanding, whilst showing what an accomplished performer he is beyond stellar, beyond masterclass, we’ll have to invent a new term for what Rockwell achieves. And he achieves all that in an actual studio fabrication, with working models, Moon is an old-school production taking me back to the likes of 2001, and Alien, it has a classic feel from the off and that is in a huge part due to the lack of CGI. This is proper filmmaking, proper storytelling, done the way it should be not the way studios now expect it to be.

Last year Jones’ Mute, the second film in this universe he is creating, blew me away and was my joint film of the year with Danish thriller The Guilty. I said in that review of Mute that Jones can tell a timeless story that works in any time period and any genre due to the way he has about his craft of storytelling that tunes into something within a viewer. The aesthetics don’t necessarily matter, we are rooting for the people. That is the feeling I first got watching Moon. Whilst it is visually stunning, and an incredible nod to past classics, it was all about Sam Bell and my feelings towards him that mattered to me long after the credits had rolled. Two scenes in particular in Moon that get me emotional every time are when GERTY finally admits to Sam that he is part of a clone system, and when Sam finally manages to get a live feed and video calls his daughter who is now 15 years old and doesn’t know who he is. These two scenes are raw emotion, they are gut punching powerful, and they take a great storyteller and a great performer to achieve. Moon may be the best science fiction film since 2001: A Space Odyssey, but more importantly, like Mute after it, it is a glorious piece of storytelling theatre written by a genius and performed by an actor without peer.

Its been 50 years since humanity landed on the Moon, its been ten years since Duncan Jones made Moon. Both are too long gaps in time that show both human advancements, and the advancement of cinema have slowed to a crawl.