Audio - Doctor Who: Emissary of the Daleks 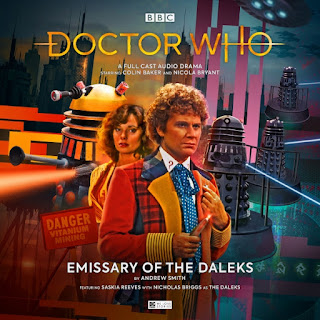 "Today is the day that all Omnians will learn the high cost of any act of resistance against the Daleks." Doctor Who: Emissary of the Daleks is out now from Big Finish...

In this second Sixth Doctor and Peri trilogy, the Doctor faces his old adversary in an adventure that sees the Daleks relying on others to do their dirty work…

On the planet Omnia, a young man leads the Doctor and Peri through the battle-scarred ruins of a city. Among the rubble he shows them proof that their invaders and new masters, thought to be invincible, can be defeated. The proof is the blasted, burnt-out remains of a Dalek.

But this is a Dalek-occupied world like few others. For one thing, there are few Daleks to be seen. And for another, the Daleks have appointed an Omnian, Magister Carmen Rega, to govern the planet as their emissary.

Why are the Daleks not present in force? And can the Doctor and Peri risk helping the Omnians, when the least show of resistance will be met with devastating reprisals from space?


Writer of this story, Andrew Smith, told us more about the Sixth Doctor taking on the Daleks: “I was delighted when producer, John Ainsworth, asked me to write a Dalek story for Colin Baker and Nicola Bryant for The Monthly Adventures range. It seemed like a natural successor to my last Monthly Adventures script, Hour of the Cybermen, which had Ol’ Sixie pitched against his other arch enemies from way back.

“So I envisaged a world taken over by the Daleks with one of these emissaries in charge. An emissary with the principle objective of ensuring there’s no dissent. Because if there is, the Dalek reprisal will be terrible. And what would the Doctor and Peri do, coming into this setup? Would the Doctor want – or be able – to quell his usual instinct to foment rebellion and overturn Dalek rule?”

Doctor Who: Emissary of the Daleks is available now at £14.99 on CD or £12.99 on download. All CD purchases unlock a download option via the Big Finish app and the Big Finish website.

Or why not save money by getting a subscription to Doctor Who: The Monthly Adventures. When you subscribe you'll get 30% off the price, free specially recorded Short Trips stories, PDFs of the scripts, and extended downloadable extras. You can subscribe for either 6 or 12 releases.