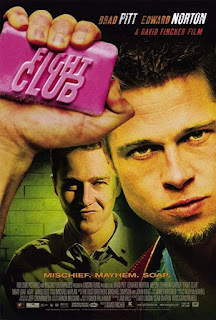 Kraig Taylor-Bryant breaks the first rule of Fight Club by talking about Fight Club (with slight spoilers but not major ones)...

Clever, insightful, and re-defines the words “plot twist”. This is how I would describe the extremely clever and well thought out Fight Club, directed by David Fincher and produced by Ceán Chaffin, Ross Grayson Bell and Art Linson. This masterpiece plays with your mind and deals with the struggles of a man (Edward Norton) with insomnia, and how this leads him to feel so depressed and fed up with his life, that he would seek out a person who encourages him to see the world a lot differently and to help him realise that those that serve others don’t get what they deserve out of life.

To help those who have realised this and want to feel like they belong somewhere or want to take their anger out on someone who isn’t the higher-up person that they aren’t allowed to hurt, a man called Tyler Durden (Brad Pitt) creates a “Fight Club”, a place that slowly over time becomes a cult, of sorts, with the goal of taking what they feel belongs to them, and ruining those that control their lives. This is almost ironic because Tyler becomes their leader anyway, and makes them believe that they are worth less to those higher up in society than them, and since they have that in common and think that they are worthless, they serve Tyler, and commit violent and dangerous acts, in an attempt to be noticed as the “little guys”. What’s really clever is the twist at the end, but I won’t mention that, in this article.

What the plot twist does do though is it definitely makes the film rewatchable in many a sense, because there are moments where when you re-watch it you will notice things that link to this twist, through simple things such as how the character Marla (Helena Bonham Carter) interacts with Tyler, Marla being a character who scrapes by on what others leave behind and who later becomes somewhat romantically attached to Tyler. Also when the main character is at a support group at the start of the film, and you see for a split second, a person at one of the meetings before they disappear, hinting at future events, though it’s so fast that you don’t think to pause and take a closer look until you watch it a second time, because you’re not looking out for these “plot twist hints”.

This film really delves deep into the mind of a person who has insomnia, because the victim of it clearly shows himself to be insane at many moments in the film, such as when it looks like he is beating himself up in front of his boss, or when he decides to hurt a guy a little too much during one of the fights in the fight club, with Tyler even remarking that he is a “psycho”. Even the fact that he goes to support groups of people that may be dying, and pretends that he is one of those people, he is shown to clearly have some kind of problem or need for gratification. And we also see Marla as a person who seems to be in a similar desperate/difficult lifestyle to him, though she simply scrapes by in the trash that people leave behind when they die (such as the food they were going to eat). I think it’s characters like her that are in this film to help us understand the kinds of people that live the hardest kind of lives. This is because we need to understand the motivations behind people joining this fight club, which we don’t necessarily understand with Edward Norton’s character. There’s also the character of Bob (Meat Loaf), that is living a tough life, and he helps to present someone who lost everything because of the fact that he has/had testicular cancer and lost his family and his job. And I think this strengthens the idea of mistreatment in society, because of how he is treated simply because of how he reacted to something he didn’t ask for. That idea is even strengthened after (SPOILER), he gets shot in the head by a police officer for trying to make something of his life because of how society has treated him.

There’s also the clear idea of how Tyler converts people through the main character. Which is by becoming friendly with them and making them feel like he is all they have. Which we do start to question his motives for, when the main guy discovers that his home was destroyed by homemade explosives, and Tyler, when we first meet him, has a suitcase full of home-made explosives. And over time the main character seems to just do whatever Tyler does because he feels lost without him, because in a way, like others in the fight club, he felt like he needed Tyler, or somebody who could tell him what he should do now, and that’s how he ends up doing everything that Tyler asked, because he wanted to feel that sense of belonging that he once had, when he had his home and felt like he was a part of society. Although he felt like he lost that after he couldn’t go to some of his support group meetings anymore, because they stopped having an effect on helping him sleep, because of another desperate person (Marla) who started going there, so he felt too nervous to let himself cry, which in turn helps him sleep. I think its also that desire to cry that made him seek out Tyler, because he realises how hopeful and pathetic his own life is and decides that he wants to feel like he has a purpose and a place in society, instead of just searching for a way to not feel trapped in his own emotions. 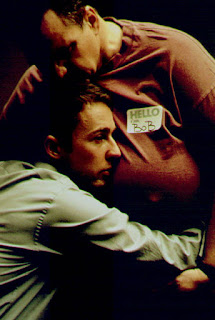 I think in a lot of ways, he goes to these support groups because he needs a way of letting out his emotions, because as we see in the film at the start, he doesn’t really have anyone who cares about him, and when he has Tyler, he becomes so desperate to stay a part of his life, he ends up doing everything that he wants to do. Though we find this is also for another reason towards the end of the film. I think this is also why, when Marla decides she doesn’t want to see him again, the main character is desperate to stay with her, and admits his feelings for her, after he has a “falling out” of sorts, with Tyler.

And we see again how a cult leader can influence its followers, when the main character starts acting out at his workplace more and more, such as when he stops wearing a tie there, to begin with, which Tyler says during fight club, is not allowed, showing again how the main character applies this to his whole life, because of his desire to stay attached to Tyler. And later at points in the film he shows other signs of not caring about those that might be higher up than himself or may be more appreciated in the workplace. We see this pretty clearly when he pushes past a woman holding some papers in the workplace and doesn’t apologise or bother to help pick them up.

And the more obvious times that he shows this is when he almost hints that he was thinking about firing a gun at everyone in his workplace, or maybe he was hinting at Tyler’s followers doing this, if his boss fusses him around or “calls him out” for doing unusual things again. And later in the film, threatens his boss, and beats himself up to make it look like his boss had done it, leading him to get a large pay check, free flight tickets, and a computer out of it. All these actions show how the violence in his life have taken over him, and his desire to remain a part of a Tyler’s life and seek his approval seems clear throughout the majority of the film. Which also seems obvious when he spends a lot of his free flight tickets looking for Tyler when he “disappears”, and the main character becomes desperate to find him.

Overall, I think the idea of feeling so attached and desperate that you would cling onto someone is what makes converting someone (like Tyler does), or making them serve you, so easy, and I think that, along with the major plot twist of the film, it reinforces how clever, yet realistic, this film is. And the plot twist of the film will also make you realise the major affect of feeling lonely and desperate, but you should discover this for yourselves by giving this brilliant film the attention it deserves.