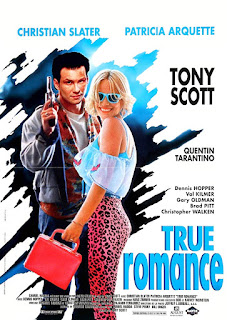 The least romantic member of the team, Susan Omand, falls for True Romance (with many spoilers)...

When is a Quentin Tarantino film not a Quentin Tarantino film? When it’s sublimely directed by Tony Scott instead, with Tarantino on writing duties and, to be honest, it was a match made in heaven for me. You get all the violence of Tarantino, but it is made even more brutal by the restrained direction of Scott, whose camera angles mean you think you see more than you actually do, turning what would be an absolute gore-fest, if Tarantino had directed it himself, into a masterclass of precision physical and mental agony. It’s no wonder they were able to command such a star-filled cast for this film.

Honestly, if you ever want to watch a movie that has the who’s who of Hollywood on the screen, watch True Romance and count the cameos. Christian Slater, who works in a comics store, meets Patricia Arquette, a “call girl” (not a whore - there’s a difference apparently) when she spills her popcorn over him at a triple bill of Sonny Chiba martial arts movies that Slater has taken himself to as a birthday treat. Only it’s no accident that she’s there as Slater’s boss at the comic store hired her as Slater’s birthday present. One thing leads to another – as they do – and, after one of the promptest sex scenes ever, they fall in love and get married and (we’re not even 5 minutes into the film yet) Arquette tells Slater about her pimp and how he bad used her, so Slater sets off to look for him, and to get Arquette’s stuff out of the brothel. Cue bad guy pimp Gary Oldman, who promptly shoots drug dealer Samuel L Jackson (Jackson is on screen for less than a minute but still says Motherf*cker several times), just before Oldman himself gets shot by Christian Slater, on the advice of Val Kilmer as Elvis, for smacking around Patricia Arquette when she worked for him. The upshot (pardon the pun) is that Slater picks up the suitcase of Arquette’s clothes, only it’s not, it’s a suitcase full of uncut cocaine. Then there’s Slater’s dad, Dennis Hopper, an ex cop who pulls some strings to make sure Slater and Arquette aren’t being looked for about the murder of Gary Oldman. They’re in the clear, so Slater decides to take the coke to a friend of his, Michael Rapaport, who is an aspiring actor who lives in LA with a permanently stoned Brad Pit… but I’m getting ahead of myself. Dennis Hopper gets sliced and diced by James Gandolfini, henchman of a scenery chewing Christopher Walken, whose cocaine it is, while they torture Hopper to find out where Slater has taken the coke. With no answer forthcoming, and after the most superb barrage of insults on his Sicilian heritage from Hopper, Walken shoots him in anger several times, complaining that he hasn’t had to shoot anyone himself since 1983. It’s then they find the address that Slater left pinned to the fridge. Scene change to LA (after a quick road trip shag in a phone booth) and Slater and Arquette meet up with his pal, Michael Rapaport (who does indeed have Brad Pitt as a permanently stoned room-mate) and they agree, after a manic roller coaster ride, to sell the coke to a producer that an acting class buddy of Rapaport works for. This aspiring actor liaison is Bronson Pinchot who, before the big deal can be done, gets caught by the cops with a face full of sample coke and is “persuaded” by the detectives (Chris Penn and Tom Sizemore) to wear a wire and set up his boss, the producer (Saul Rubinek). However, in the meantime, James Gandolfini has caught up with Patricia Arquette, who refuses to tell him where Slater and the cocaine are (the coke is in a suitcase under the bed). There’s a big, and very vicious, fight between the two of them, including her being thrown throw a glass shower screen after stabbing him in the foot with a corkscrew. Gandolfini is killed when Slater returns and shoots him, picking up the badly beaten Arquette and the coke, and setting off for the meet-up with the producer at a hotel.

So, we have Walken’s mafia, Chris Penn's cops, a drug dealing producer with hired guns, a stooge wearing a wire and our three friends, Slater, Arquette and Rapaport, all converging on one little hotel suite. Let’s just say that the feathers really do start flying at that point.

But this is meant to be an article about Christian Slater and he is absolutely stunning in this film. I know I was very flip with the synopsis above, skating over the story to point out the cast rather than the characters, but Slater adds a surprising depth to the character of Clarence Worley. You can tell Clarence is truly, and immediately, in love with Alabama, Patricia Arquette’s character, and their onscreen chemistry is highly convincing. But he also gives Clarence a decidedly dark side, making the manifestation of Elvis as a spirit guide for him completely believable and utterly normal, especially in that scene in the bathroom where Elvis talks him into killing Alabama’s pimp, Drexl. There was no madness there, no psychosis, it was a reasoned and reasonable debate which, to me, made Clarence incredibly dangerous. More than that, though, was his complete lack of fear or, rather, fear absolutely cowed by bravado, bluffing his way through the situations he finds himself in. Clarence is a man that can take everything in his stride without any panic and I think only Christian Slater could have imbued him with that level of self-belief. Apparently Tony Scott gave Slater the Scorsese film Taxi Driver to watch before filming started “to give him an idea” of the character of Clarence. Whether or not that’s true I don’t know but it worked.

There should have been Oscars for True Romance, for Tony Scott, for Tarantino, for Arquette and Dennis Hopper. But most of all for Christian Slater who remains, in my view, one of the most under-rated actors out there.