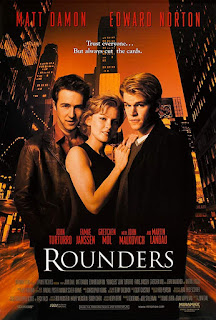 Before the big poker boom of the early 2000's, Rounders was an underground favorite amongst wannabe card sharks and low-level gamblers. When Chris Moneymaker, an amateur, won the World Series of Poker in 2003 after qualifying for the event by winning an online poker tournament, the world of poker shot to the forefront of pop-culture. Rounders became a beacon, calling to a bunch of guys that remove their shoes when they need to count to twenty, and convinced them they have what it takes to become the next great poker story. Much the way The Beach inspired a generation of trust-fund babies to search out life's meaning in the sand and surf of a South Pacific island.

"Rule number one: Throw away your cards the moment you know they can't win."

In Rounders, Matt Damon is Mike McDermott, a poker grinder that occasionally studies law. Jo, Mike's girlfriend (Gretchen Mol) doesn't understand why poker is more than just a card game for her boyfriend. Jo's hesitation is not unjustified after Mike loses $30,000 to a Russian gangster with a bad Russian accent. The 'Mad Russian', known as KGB (John Malkovich) takes a lot of flack from film fans and even people who love the movie; but KGB is meant to be a caricature. Malkovich is an incredible actor, and the rest of the movie is well-acted, so I feel it's safe to say that his pedestrian representation of the character was purposeful. His depiction of KGB is ridiculous in all the best ways.

The point I find interesting in this film is how they depict the most significant difference between Jo and Mike, two intelligent minds with a penchant for barrister related pursuits; poker is something that comes easy for Mike, while Jo sees it as futile. Showing their polar opposite mindsets is a minor piece; Jo is a perfect foil because you don't really disagree with her at any point even while her reservations border on nagging. You're still rooting for Mike the whole time, and continue to do so when she leaves him, because you feel that she is making a mistake, but it's easy to respect her decision as a strong, intelligent woman who knows her worth. I didn't appreciate that when I was younger. Sometimes, you lose a good woman just because you're paths are diverging, and neither party is really at fault. Rounders and poker: Life Lessons 101. 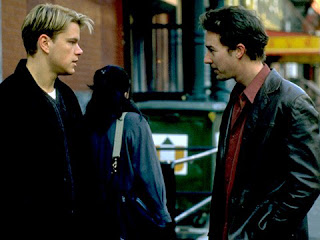 "I just can't believe you're still friends with someone named 'Worm' "

Without a doubt, the best thing about Rounders is Worm.

Edward Norton plays Worm, Mike's best friend, and he is a textbook example of a "loveable loser". A loser in every way, but undeterred by circumstance, Worm sees the angles and takes them. Stacking the deck, base dealing, any form of cheating he can get away with. Friends since childhood, Mike buoy's Worm. But as Worm's life-vest, Mike ends up getting pulled under more often than not. That is a universal dynamic that resonates with a lot of people in this world. Trying to be the successful, responsible person while your friend can not get his shit together; wanting to cut them loose but knowing you'll feel responsible for whatever pit they stumble into. Problem is, most guys who watch Rounders imagine themselves to be like Mike when they are almost always more like Worm.

The most underrated aspect of Rounders is the soundtrack. Composer Christopher Young, known mostly for his work on horror and thriller soundtracks, masterfully gives true depth to the film. Not depth to the writing itself, but to the five senses. We interpret the visuals in our minds as having depth, but Young fills in the air, in the room you're sitting in, with the sounds of New York City at night. A dank backroom, where shady men in leather coats keep their profiles low but never drop their eyes. The wonderful script by David Levien and Brian Koppelman shows you that world, the actors invite you into that world, but the right music makes you feel that world, taste it, smell it, live it. Young's score does exactly that.

What struck me upon rewatching Rounders is that Joey Knish, Worm, and Jo are actually all foils to Mike - but not in a negative way. Each one is a parallel universe version of Mike: Knish, the grinder who has the skill but never goes for the big score; Worm, the loveable loser (who is sometimes not that loveable) who takes too many shots then can't get back to even; and Jo, the brilliant legal mind who has no use for card games and focuses on more noble pursuits. Mike has to overcome each of these iterations of himself to become his most prolific final form. It's easy to imagine Mike following any of those paths if a few things had gone differently throughout the course of his life.

The odds in this world are stacked against you at all times. But if you're on the right path, you can feel the universe encouraging you to keep going. Mike is desperately trying to fulfill his potential in the way that he knows he's meant to, despite what anyone else thinks. He forges his own path, in the way that only professional gamblers and comedians can.

The game of poker inspired the film but Rounders ended up having a similar influence on the game of poker as an idea, an improbable world of nascent probability, that outsiders could daydream about.