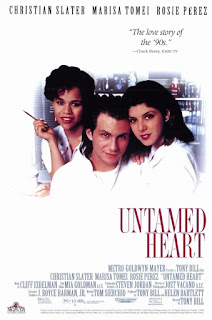 In 1993 I was 18 years old, and despite getting married at this age I had no romantic bones in my body, my poor now-ex-wife deserved better than teenage me but there we were, two polar opposites trapped in a life neither of us was ready for. We had nothing in common, thinking back now I have no idea why we didn’t see how bad this was going to be for both of us, age I suppose, but we both liked films so we had that. Except I was 18, I wanted to see people's heads explode on my screen, or some comedy about dick jokes and sex, my poor partner preferred the more romantic elements that cinema had to offer. In a very rare moment of compromise, I agreed to go and watch a romantic film but only because Christian Slater was in it and I was a fan of his from Pump Up the Volume and Kuffs, and pretty much anything he had made to that point. I hated it. Romantic drivel. We all moved on in our lives, went our separate ways, but at the back of my mind was this romantic film, Untamed Heart, and I still couldn’t put my finger on why I hadn’t enjoyed it. I refer you to my answer to everything else earlier in this article, age I suppose. I watched the film again a few years later and it wasn’t as bad as I remember, and then about fifteen years ago, over a decade since the film had been released, I watched it again and wept. I had fallen in love with the story, it had given me an emotional gut punch, and the only reason I can think is that I was older then, more experienced in life and so the elements of the story that should have landed upon release were now relevant to me in the stage of my life I was in. I watched it again the other night for this article and can’t believe I used to hate this film, it is wonderful and heart-warming, in an albeit slightly cheesy way.

The story revolves around Caroline, played by the always wonderful Marisa Tomei, a waitress in an all night diner who works with a very quiet and reserved busboy Adam, Christian Slater who shares in this film the same haircut I had in 1993, and her pal the chatty Cindy, Rosie Perez playing the part as Rosie Perez (I have only ever seen Perez play one type of role, if there is better examples of her acting out there then please feel free to educate me with suggestions). Adam’s back story is a strange one, as an orphan raised by nuns, he had a weak heart that left him liable to collapse and so the nuns had him operated on which left a huge scar over his chest. The problem is he is now desperate for heart transplant but as a child was told by the nuns that his heart was that of a great ape as Adam had been born in the jungle and he thinks he won’t be strong if he has it replaced. One-night Caroline is walking home through the park and is attacked by would be rapists but is luckily rescued as Adam was following her and fights off the evil doers. From this incident an unlikely romance begins, and she learns Adam’s story. 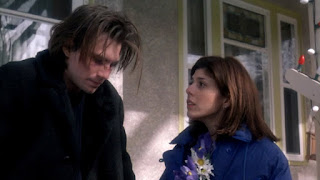 As a romantic film it is okay, but full of plot holes and creepiness if you watch it as a real-life story, I mean why was Adam following Caroline from the shadows in the first place? That is stalker behaviour! But, if you watch it as a modern-day fairy tale the film works incredibly well, you have your Princess, Caroline, some real dread in the attack, an unlikely pauper to the rescue, and a romance that makes him a prince. Soppy? Yes, but enjoyable. Maybe not for younger people who don’t really understand that sometimes soppy fairy tales are what get a hardened older person through a day, but now, twenty-five-ish years after its release I finally understand why I should have loved it then. Tomei, as mentioned above, is always wonderful and in the modern unlikely Princess role in Untamed Heart she seems to thrive and grounds some of the more ridiculous elements of the story in a realism that works for this film.

Slater’s filmography to this point seemed to have avoided any characters that could be considered quiet, he had been big and brash and right in your face in most things, and so to see him so reserved and restrained in Untamed Heart is a joy, a real joy, that shows he truly does have some actor's gifts. We may like him most in Pump Up the Volume, or Mr. Robot where he is ranting in that croaky New York drawl but my word when he shuts up, he still has something very special. Untamed Heart is a beautiful film that I regret took me decades to like.